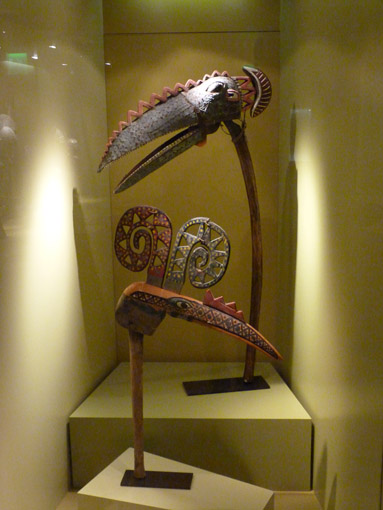 The Museu da Marioneta of Lisbon is full of peculiar collections. Starting with global marionettes as water puppets from Vietnam or shadow figures from China and Turkey, the visitor is guided into Lusitan’s tradition —from its European roots through old puppeteers until late 20th century renovation and a bit of animated cinema. Also visitor can see some witnesses of Brazilian mamulengos. (You can read this article in Spanish by Toni Rumbau about the Museu da Marioneta.)

In addition there is a very special corner at the museum dedicated to African masks. They belong to Francisco Capelo’s Collection and are shared with the Museu Nacional de Etnologia. Most of these masks are part of the Sogo bò representations, performed annualy at the region of Ségou, Mali. It is a unique theatrical form composed of dances, masks and puppets in a strict ritual. Sogo bò means “the animals come forth” and, in fact, most of the masks represent animals. They are very important in the whole repertoire as they symbolize the nature of humans, their qualities, strengths and weaknesses.

Four different ethnic groups perform the Sogo bò. Even if they have different performing forms and traditions, they have common myths about the creation of Arts in the forests —“a place full of nyama, energy, extraordinary force of life”. (1) To keep all this force of nature, sculptures are carved to give a specific information to audience maintaining the essentials. The shapes of peaks, horns, snouts, heads or ears are distinguishable although they are colourfully decorated, using also tissues. It raises their dramatic power and makes them very characteritic. 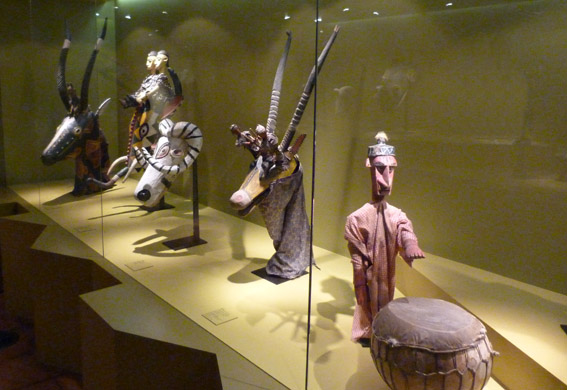 Any figure must be clearly identifiable: antelope horns are not much long, and gazelle ones are straight and curved at the tip, for example. The dialog between the shape of the sculpture and its modifications or decorations, the jayan and the jako, is a subject of discussion between carvers but also among the whole population —in a similar way than they discuss about the rhythm of the dance and its figures, or the melody of a song and the way the musicians perform it. In no way accessories or paintings can blur the inner substance of any character. The separation between the essential and its representation is seen as a matter of moral that can be applied to all subjects of life.

The cast is not closed and all social rules are represented, as well as indivuals, children and grown-ups, farmers, fishermen, governors, public figures or even settlers (before 1960) and western ethnologists. “The society of Mali is both traditional and modern —it is constantly evolving. Mask and puppet theatre is a mirror of its richness and complexity. Far from being a sign of decadence, the capacity of Malian theatre to integrate new subjects witnesses its capacity to be alive in its society”. (2) It is not only a representation of reality, it also “gives a freedom of expression that allows actors to convey criticisms or opinions that young people could not utter otherwise”. (3) In fact, even if the Sogo bò is considered a way for young people to be united and integrated in their community, it is at the same time the way the generations compete, so the content of the drama has much to see with the tensions between the collective and the individual, the tradition and the change. 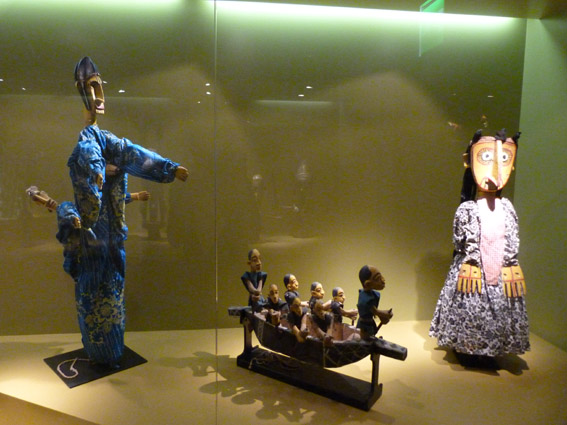 Three main groups are involved in the performance of Sogo bò: carvers (called blacksmiths), young men and women. (4) Professional carvers make both masks and rod puppets since the beginning of the 20th century. Young men are organized in associations; they perform the mask dances and play the music. Women sing and make the voice of masks and marionettes. “Usually performed outdoors, it normally starts with a prelude of dance. Women and men from the association make a round dance —girls in an inner circle and young men surrounding them. They start to move all at the same time anticlockwise. They step slowly at the beginning, but the drummers gradually speed up the rhythm until the dance becomes frenetic and the circle breaks. Then two youngsters come into the space of the circle and start to dance simultaneously. Again, the rhythm of drums speeds up and they introduce somersaults, pirouettes and other acrobatics”.

This can last several hours, then the masks come in. In groups that include the actors, the dancers and the musicians, they perform different scenes: each one have a main character and last between five and fifteen minutes. After every scene, there is an interlude. Though this structure can change if one troupe decides to play two scenes in a row or if they want to last it longer time to make it more dramatic. In fact, the groups “explore a wide range of arts to create a sogo bò nyana —a succeeded mask dance”. (5)

This is probably one of the most peculiar aspects of the Sogo bò: even if is a tradition that defines the identity of the community, it does not have stable scenes. It has been along the years a type of theatre of the youth, the ritual through which young people can lead the collective for a lapse of time, so it is dynamic as they continuously borrow succeeded tricks (musics, masks, dances, etc.) to former generations or even to other communities. 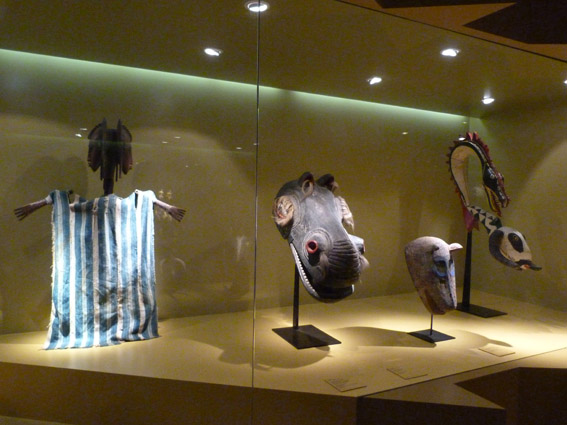 The figure on the left represents the conflicts in polygamous households. Relations between men and women are very present in the Sogo bò.

There are three different kinds: the sogo kun are animal big heads made of wood, manipulated with long rods by a puppeteer dancer hidden under a structure of branches, leaves or textile that represents the whole body of the animal; the ones representing the head and the torso of humans, also emerging from a structure that represents the whole body, which the dancer puppeteer manipulates its arms of, and finally the smallest figures, the sogodenw (young animals) or maani (popular characters), that come out from the animal’s back or head, manipulated with little rods or rods and wires through a system of sheaves. The type of mask or puppet and its technique often depends on the animal —itinerant carvers contribute to the regularity of represented characters and their material representation. (6)

The stories, the style, characters, dances or songs contribute to create an identity, so they are very distinctive. Their goal is create the feeling of belonging to a tradition, a community, ethnical group, village or neighbourhood. For example, it is very common to see water animals like fishes or crocodiles, or scenes of river transport in Boso and Somono ethnic groups, whereas Bamana often show figures of men working with plows. The Boso sing songs to the ancient hunters, the Bamana use figures from men iniciation rituals into theatre performances too. (7) The traditional heritage of every associacion of young people is set very clearly in its songs —similarly to how the little rod puppets representing daily actions build their ethnicity. Though the attending people may come from other villages or have a different ethnic identity, which leads them to discuss about the characters or the mutual influences between groups or the develope of this theatrical form along the years.

Indeed in all these performances the separation between the audience and the dancers-pupeteers is thin —they are all mixed. This makes a fusion aimed to an utopic union of all: neighbours, men and women, young and old people, animals and ancestors join the theatre place. (8)

When Francisco Capelo offered 40 pieces of his collection to the Museu Nacional de Etnologia of Lisbon, in 2002, he had been impressed by the effect of seeing a number of masks, a group, a complexity, more than one single piece. Quoting Jean-Paul Sartre, he wrote: “The concept of community can be only thought through the notion of aggregation because it is crossed and defined by instability. The will of unification allows to set successive fusions (…), but the act of being a community is always threatened —and the threat of breaking produces the energy that moves masks, puppets, singers, musicians and dancers and prevents separation and difference install themselves between audience and actors.” (9)

The Museu da Marioneta of Lisbon displays also four masks from other regions: one Gelede from Nigerian Yorubas, two from the islands of Bijagos, in Guinea-Bissau, and one from Angola.

(1) Mary Jo Arnoldi, “Criação, Imaginação e Conhecimento nas Máscaras e Marionetas do Mali”, in Sogobò; Lisboa, Instituto Português de Museus, 2004. Part of this article has been based on this work.

(8) For Francisco Capelo, it is important to note that often the space of the theatre is the same of the main square of the village, in front of the chief’s house or the young people associacion’s local, or the market place. Francisco Capelo, “A magia dos animais”, in Sogobò; Lisboa, Instituto Português de Museus, 2004.

Thanks to the Museu da Marioneta to allow me to cosult its Documentation Center. 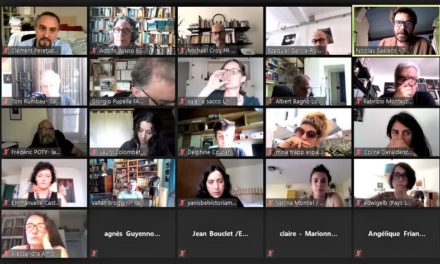