On July 19, 2012, the team of the Revolt of the Puppets moved to Institute del Teatre de Barcelona for a second “exhumation” of puppets who sleep in the MAE warehouses (Museum of the Performing Arts). If the first time was to get out of their boxes puppets from the Anglès Family (with their current representatives), the second was to return to the daylight some of the marionettes of the great English puppeteer Harry V.Tozer, Barcelona resident for most of his life and creator of an immense work one day rescued by the Institut del Teatre, offering a permanent position as professor of marionettes.

We should clarify here that the revolt of Puppets is a project for the realization of a television series of thirteen chapters on the history of puppetry in Catalonia, an initiative that has emerged from the BiblioMusiCineteca and the same magazine Putxinel·li–Titeresante–Puppetring, with the following people involved: Ferran Baile, Jesus Atienza, Sac-Nite Garcia, Cesc Martinez and Toni Rumbau. His goal is to fill a void that the current resurgence of puppetry in Catalonia has become indispensable. Puppetring, through its catalan portal Putxinel·li, has published several reports on the interviews. See them here. 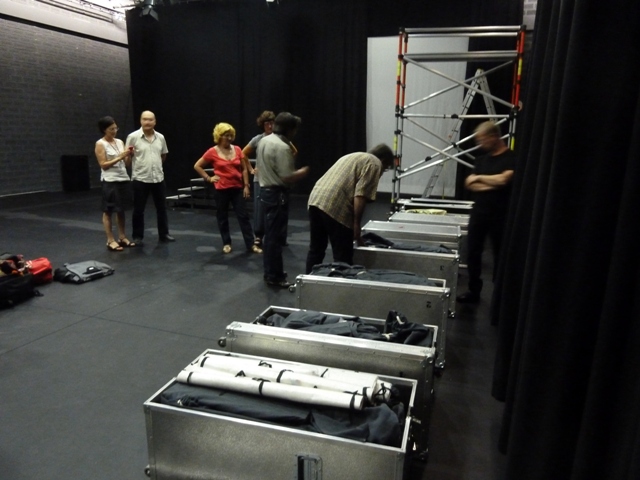 For years the boxes constructed by Carles Cañellas -in a time when these puppets toured several exhibitions- were not open and great was the expectation to see the state of the puppets and to meet again with the faces and bodies of endearing characters that marked a whole generation of puppeteers. The responsibility to remove these refined and complex marionettes was big, and that is why team of the Revolt of the Puppets called three experts in the art of string: Teresa Travieso (Mr. Tozer assistant for many years and a person who was very loyal and close to him), Carles Cañellas (despite not being a direct disciple of the Master, it was indirectly through Pepe Otal, former student of Mr. Tozer) and Oriol Pont (a young talent in the construction and manipulation of string puppets currently working with the company Marionetarium Herta Frankel). Three puppeteers belonging to three different generations and could deal face to face with the puppets we had to get out of the boxes. 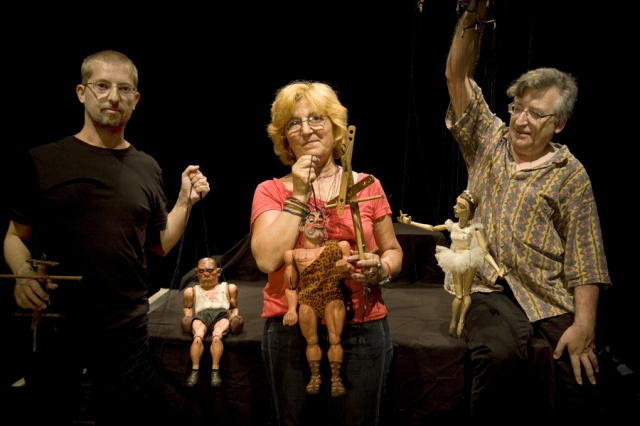 Ana Valls, director of the MFA, was also present, very curious and excited to “revive” for a few hours those puppets that constitutes one of the jewels of the museum collection. Also Pilar Gálvez, from the Marionetarium company, was there -along with Fernando Gomez, she is the head of another important collection of marionettes in Barcelona, belonging to the Austrian puppeteer Herta Frankel. 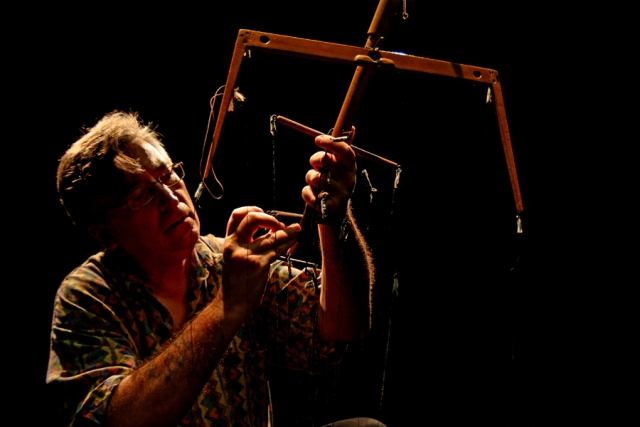 We carry the boxes in one of the large classrooms of the Institut del Teatre, prepared for presentations, rehearsals  and audiovisual recordings, where a small stage were ready prepared for the occasion, well lighted by some spotlight. 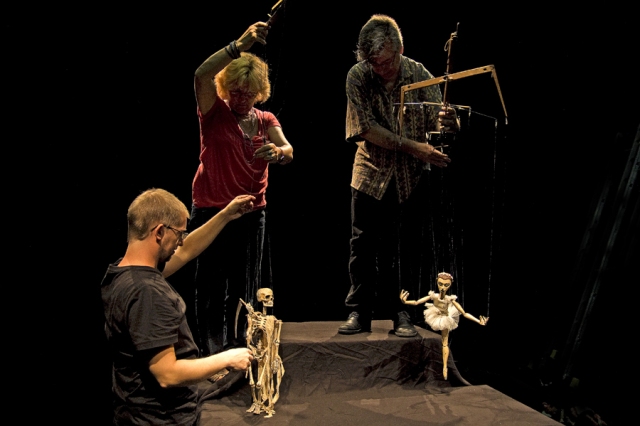 It was very exciting to open the boxes, one by one, to find out its content: scenery props and objects in ones, marionettes in others. Both Teresa Travieso and Carles Cañellas as well as some of the attendees, knew more than enough the names and roles of each puppet and object, and the Institut del Teatre’s set room began to fill with memories and images coming out of the boxes opened, very special moments in the history of the city itself and The Institut del Teatre, when this school had not yet become the magnificent institution that is now, and the decisions and programs were produced as criteria more related in a lively dialogue with the time of today. The very fact thoroughly to enjoy this puppets of Mr. Tozer, is due to the spontaneous decision taken by Herman Bonin, Xavier Fàbregas and Josep Montanyès of offer to the English puppeteer a space to develop his work and teach whoever was interested . Something unthinkable today. 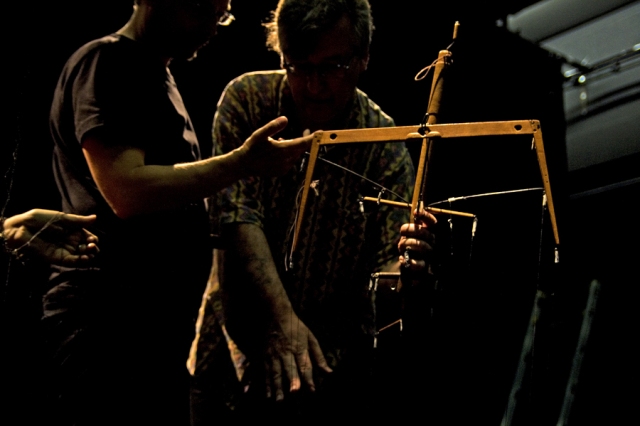 I think that the images captured by photographer Jesús M.Atienza offered in this report illustrate perfectly and masterfully unusual atmosphere of mystery, poetry and emotional transport through time we lived this morning. Moments that the video camera Sac-Nicte Garcia also immortalized, completing the chapters on the history of the Catalan Puppets in which the figure of Mr. Tozer appears. 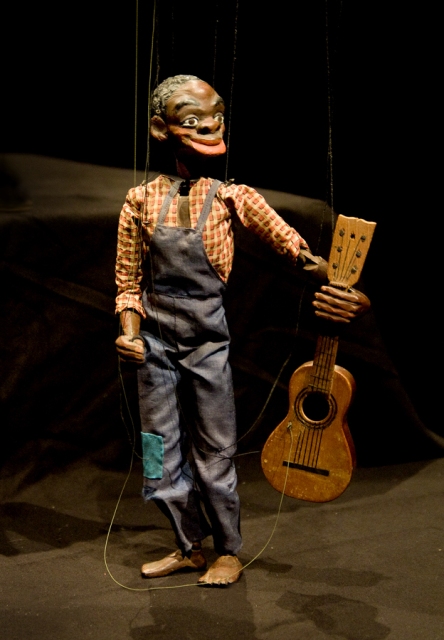 But perhaps the most exciting thing was to see how some of the marionettes were moving quickly driven through the hands of the three puppeteers who held them. Somehow, it was evident the continuity of the mastery exercised by Harry V.Tozer because its sophisticated string technique were perfectly behaved and understood by the current puppeteers, without the passage of time seems to matter at all. To see the Boxer, Pompilo Clown, the Death with the dancer, or the weightlifter, acting with the freshness and grace intact, made ​​us think it would be possible to start again with the old theater of Mr. Tozer. No doubt that would be the best way to keep in good conditions the puppets doing its part to make themselves known to society. 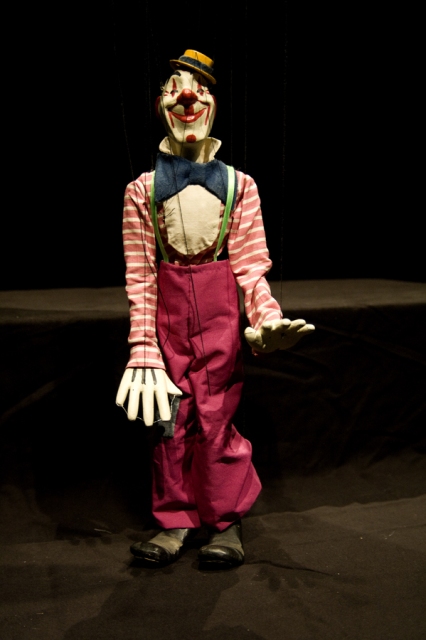 We also take the opportunity to interview Anna Valls, head of the MAE, and thus to know further major collections that are stored in their warehouses. We are very interested to know the state in which the Theatre Museum project has already granted a building. Although she could not talk about specific dates -the current economic situation does not allow for such luxuries- we saw her very hopeful or at least convinced of the need to seize this opportunity and take the step that Barcelona theater lovers require long: to open at least its Museum. For the puppeteers, aware of the importance of the collections of MAE over the puppets, it would be a long-awaited news.

Here are some more images, taken by photographer Jesús M.Atienza. 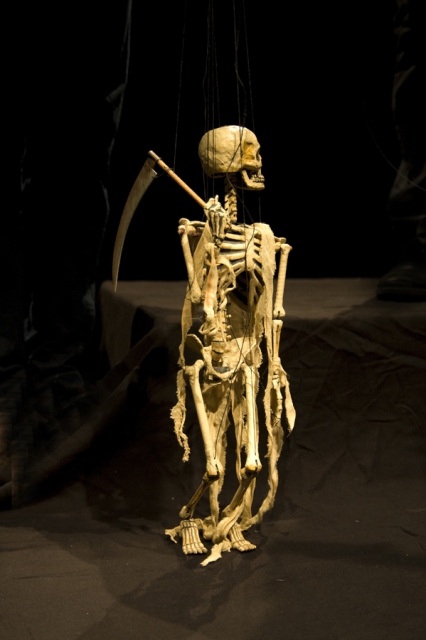 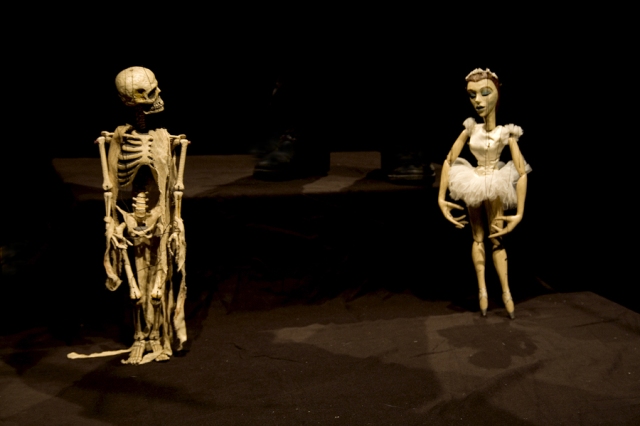 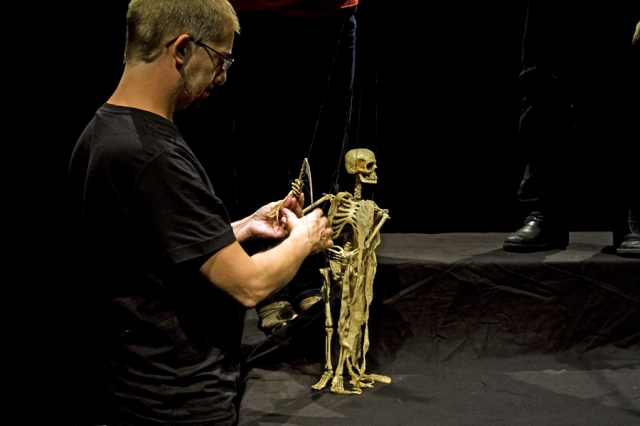 Oriol Pont with the Death. Photo by Jesús M.Atienza. 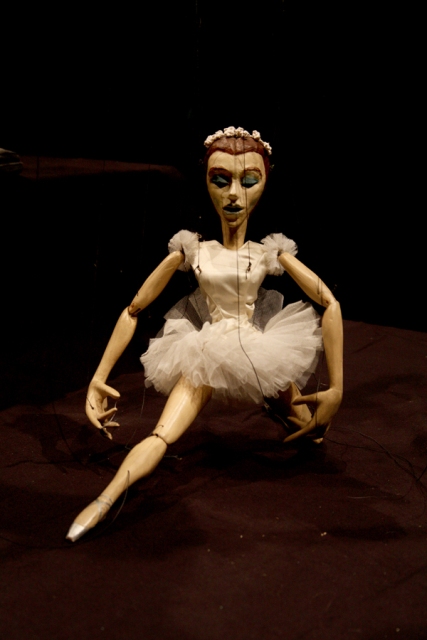 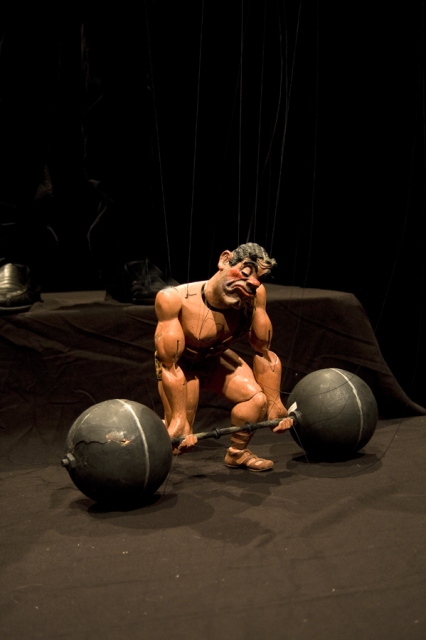 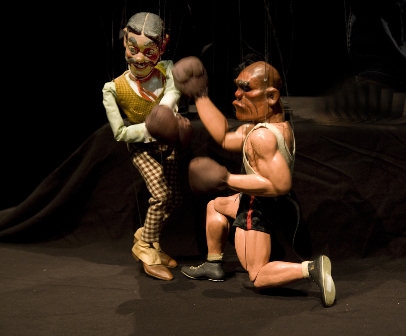 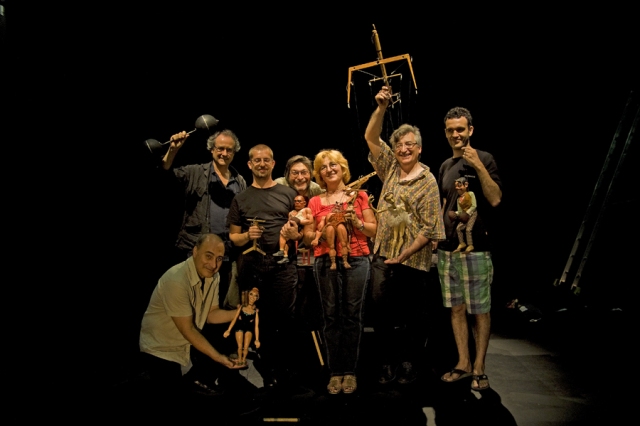 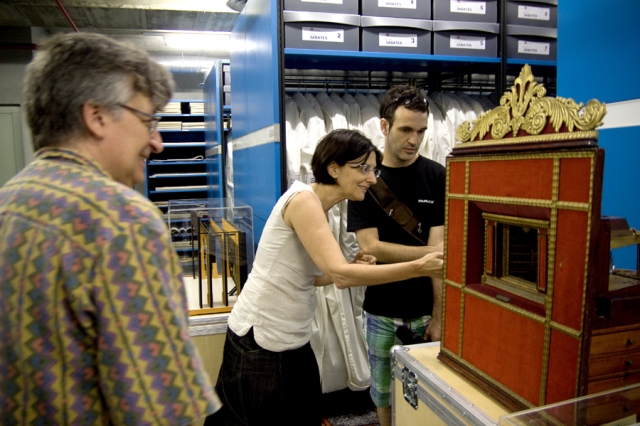 Anna Valls shows some treasures of the museum. Photo by Jesús. Atienza. 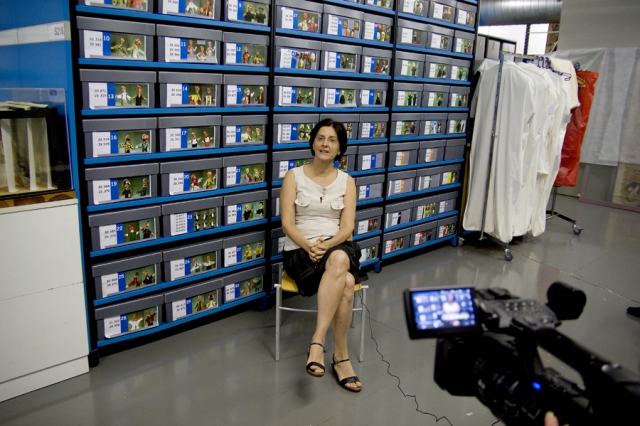 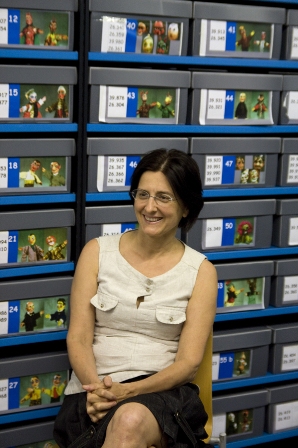