The exhibition “Khon. Thailand’s Court theatre” is a wonderful opportunity to see and learn from a wide and outstanding range of Khon masks. These masks allow invoking the presence of animals, demons, mythological characters, and even the Gods that are crucial to re-enact the scenes of the Indian epic poem, the Ramayana. In order to put them into context, the Museu da Marioneta in Lisbon has gathered other art works, from different natures and dates, but all inspired in the same characters, themes and dramas that are somehow linked to Khon masks. All these items belong to the Francisco Capelo Collection, and most of them are deposited at the Museu da Marioneta in Lisbon.  The exhibition runs from June until September 22, 2013. Here is a thorough explanation of Khon Theatre sent by Maria José Machado Santos, director of the Museu da Marioneta in Lisbon. 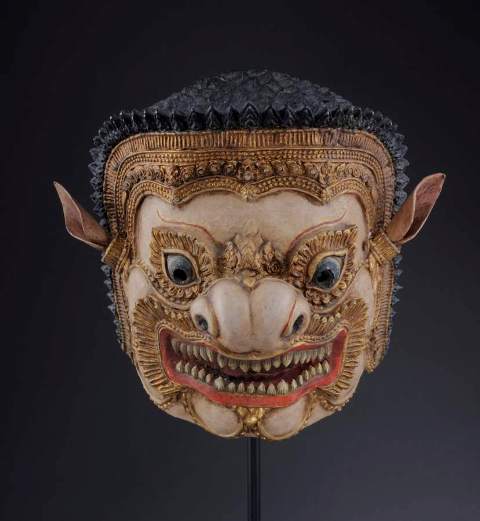 Museu da Marioneta proudly presents an exhibition on the world of mask and puppet shows from a South Eastern Asian country. Just like the previous temporary exhibitions – Sri Lanka and Java (Indonesia) – this one would not happen without the priceless contribution given by Francisco Capelo, whose collection is deposited at Museu da Marioneta.

Although this collection encompasses other elements from the Thai culture, namely 3D puppets (Hun) and two types of shadow puppets (Nang Yai and Nang Talung), this exhibition focuses solely upon the world of Khon theatre masks.

This set of top quality masks can hardly be found in any other place in Portugal as a whole.

Since this type of show was almost exclusively shown in palaces, it was of utmost importance that we tried to re-create its environment. From the very first day this was the concept – and we may even say primary condition – of the collector Francisco Capelo. Therefore, apart from his masks deposited at the Museum, he provided us with other items, such as cabinets, textiles, ceramics, paintings, sculptures, and manuscripts that add extra value and a cosier environment for the masks, and allow the visitors to understand the overall reality of the various Khon theatre characters.

The Khon is one of the most spectacular drama-dance from Southeast Asian countries.

Its actors do not talk. They just interpret their characters through expressive gestures and the Thai dance vocabulary as they embody the characters from the Ramakien.

Rama II (1809-1824) was thought to be its creator for a long time, but today we believe it is much older. There is a written reference to a Khon play recorded by a French delegation in 1691. It has been regularly mentioned in written sources, as royal decrees, as off the 18th century. 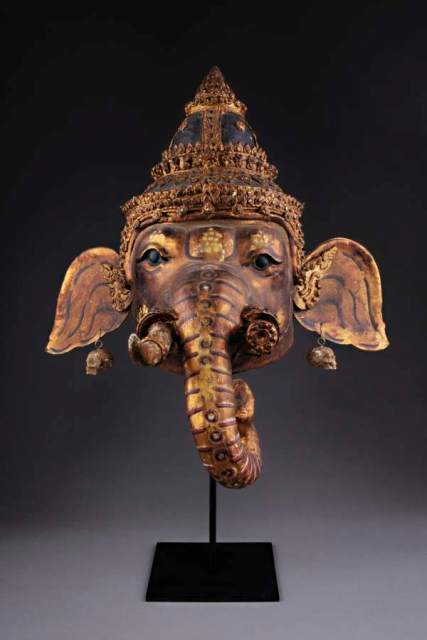 The Nang shadow theatre was quite often seen as one of the possible sources of Khon theatre because it was known for a fact that there was a type of Khon that would have a sort of screen similar to the shadow screen. This thesis could explain their similarities. Both of them use the same type of archaic verses, motion techniques, and make up. This could also explain the major features of Khon dance – the dancers almost endless stillness in decorative positions, as well as a trend that features a silhouette that is almost identical to the one of Nang Yai characters.

Yet another approach to the birth of Khon is linked to ancient performing rituals, as the Chak Nak Dukdamban (to pull a giant serpent) that was usually held during coronation ceremonies. In this grand event both military and civilian personalities dressed up the characters as demons and monkeys, to re-enact the scene of the Hindu creation myth.

A third source for Khon – or at least for some of its movements – could have been the Krabi Krabong, or sword and baton dance mentioned in a 1458 inscription. That dance would use the open leg position with music.

It was performed by princes and noblemen learning martial arts techniques.

Khon masks use all the classic dance techniques from the centre of Thailand.

Human beings use the whole range of movements from that dance, while the other characters – monkeys and demons – have their own basic movements and are dominated by the open wide legs’ position (Indian influence upon the South Eastern Asian dances). 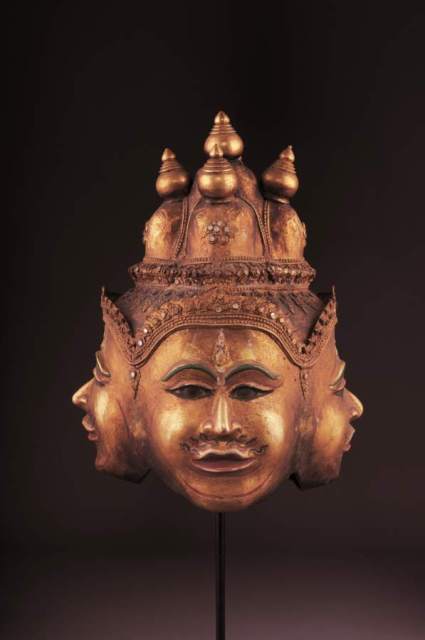 The demons’ movement techniques may have derived from ancient Thai martial arts. With its powerful feet stamp, the demons’ dance is rather aggressive, while the monkeys’ dance – with its funny and acrobatic elements from real monkeys – adds yet another element (the ancient animal dance) to the complex Khon vocabulary.

The Khon is the combination of various elements. Its narrative is based on the Ramakien, and the make up and movement techniques are based on the Nang Yai shadow theatres. Some other movements are based upon the martial arts that provide the dance-drama models for battle scenes.

An additional feature of Khon masks is the court’s rigorous etiquette, which reflects Thai’s traditional courts in both Rama and Tosakanth.

The plays usually begin with a scene at Rama’s or Tasakhanth’s palaces. This long scene introduces the conflict of the story itself, as well as previous events. The most spectacular are the battle scenes.

Rama and Ravana (Tosakanth) enter the stage through opposite sides on their flame ornamented golden carriages driven by men wearing horse-head masks. They all wear their gala costumes and hold ornamental bows.

Tosakanth is followed by an army of demons performing fierce dances while waving their bats.  Rama is joined by his brother Laksmana and by an army of monkeys.

In the end victorious Rama rises and stands upon the tights of the loser to be acclaimed by the spectators.

The victory scene is almost a still image that matches perfectly the murals and low relief carvings from Thai temples.

Khon shows also feature an orchestra – Piphat – choirs, singers, and narrators next to the stage.

Narrators describe the plot and recite the lines of the characters on stage with utmost expressiveness.

Just like in many more theatrical traditions from South East Asia, narrators play a crucial role in the success of the play. They are just as important as the actors who move upon the stage according to the narrator’s lines.

There are two types of dances in the Thai dance-drama: movements illustrating the text or dance with music. Both kinds are widely used in Khon shows. 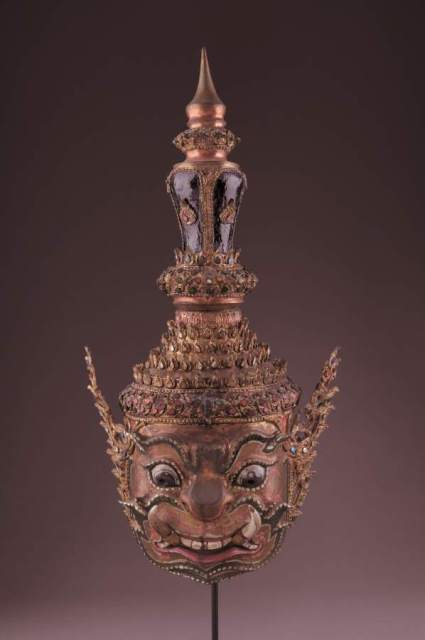 Originally all characters wore masks but nowadays human or god characters no longer wear them. They do however wear crowns.

There are some 200 or 300 types of masks, and they may be divided into five groups: demons, monkeys, heavenly beings, human beings, and animals.

The major groups are the demons and the monkeys. On the other hand they also may be divided according to the kind of ornament they have: masks with sharp crowns and different endings, and crownless bald masks wearing a type of tiara.

Characters are easily recognisable by the spectators by several elements. Each character has its own constant features and the mask manufacturer is not allowed to change them because they would not be recognisable.

In some cases they may have features from other categories. For instance, Indrachit, son of Tosakanth, has human ears. They may also have some features that indicate their lineage, as two other Tosakanth’s sons that have small trunks instead or noises, thus showing their mothers were elephants.

There are 14 types of crowns for the demons. The more important a character is the more decorated its crown is.

The most important demon is Tosakanth, and its mask is highly decorated.

Its green face is enlightened by blue and golden lines, and by red lips. Its eyes are wide-open, and its growling mouth has curved tusks. Its crown has several levels: the first is decorated with golden leaves and flowers, and the others replicate a tiny drawing of the mask itself and symbolise the ten faces of Tosakanth. The last one has a heavenly face. According to Mary Lou Robertson one of two theories could explain it.

On the one hand Tosakanth is seen by some as a descendant of Phra Phrom, the Thai name for the Hindu god Brahma, or, on the other, as a not totally mean character. It is originally good but acts aggressively. It is seen as a character that was somehow linked to the gods before it was born. 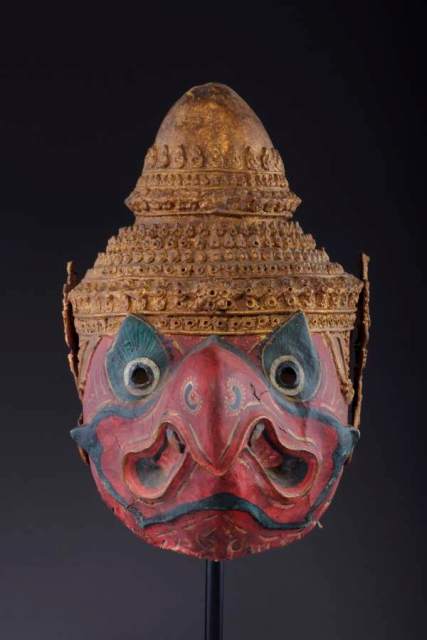 We may believe in one or the other but it is however widely accepted that the heavenly face that is on top of the crown represents its link to the gods.

The crown is shaped as a victory crown (the name given to the Thai royal crown) with different levels,  ending with a kind of sharp tower. Rama also wears this type of crown.

Tosakanth sometimes wears the golden mask that symbolises its nice and pleasant personality. Tosakanth is a demon with 10 heads and 20 arms, which represent its huge power translated in the multiplying body parts, just as it often happens with the representation of Hindu gods.

The second major group is the monkey group, King Rama’s allies. It has some 30 or 40 masks. They also have specific features – colour, shape, eyes, mouth, and weapons. They all have wide-open eyes and may be divided according to the type of crown they wear.

“Yodbat” crowns used by the two monkey kings Sukrip and Pali indicate a high royal level: they both are children of the gods.

Bald masks are more numerous and are divided according to Hanuman’s army hierarchy.

Hanuman is the monkey’s army most important general. It has various features that represent its special powers.

Its white mask is highlighted in green and pink. Since it only wears a single tiara, the golden and red marks on its head are quite visible. Its mouth is wide-open and shows its canine teeth (a feature common to all demons), and the jewel is placed on its palate, as a symbol of all its powers. When Hanuman yawns its exhales suns, moons and stars. It can fly because it is the son of the wind god. Another of its signature features is the jewel between the eyebrows that symbolises its inner energy. It can also be found in images of Buddha.

Human and heavenly masks are no longer in use but are however still manufactured. They are simpler than the monkey and demon ones, but seem to be more refined. Again, its colours vary according to the character they represent.

The hero Rama is green, but with a different shade from Tosakanth; its brother Lashman is golden; and Phra Isuan, the Thai designation for Shiva, is white.

Divine characters usually have their mouth closed, and the more important ones wear a jewel between their eyebrows.

Although each character has distinctive features, there are so many of them that some masks tend to be quite similar to others, except for some small details. That is why some masks are not on stage at the same time, which makes them easily identifiable.