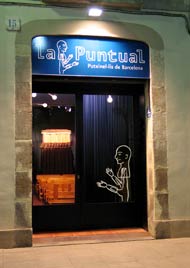 In 2011, Eugenio Navarro celebrated 35 years as a puppeter. La Puntual opens in Barcelona as a puppet theatre coinciding with the “Fiestas de la Mercè” in September 2005. The walls of La Puntual however, had been familiar with puppets, marionnetes and Chinese shadows since 1986 due to the fact that it had been the workshop and rehersal room of the reknowned puppet company La Fanfarra.

La Puntual owes its name to Santiago Rusiñol, an emblematic Catalan modernist artist born on the nearby Calle Princesa, who wrote the now classic play “L’Auca del Senyor Esteve” the action of which is centered around the family that owns a haberdashery shop called La Puntual, located very near the actual theatre.