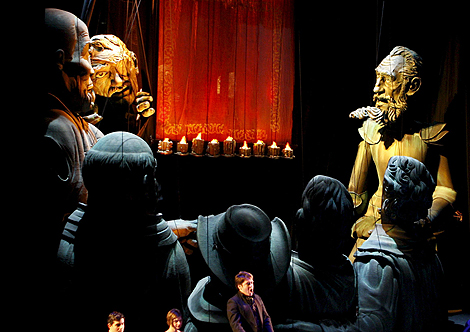 Founded in 1981, Etcétera from Granada, directed by Enrique Lanz, has become one of the internationally best known Spanish companies. The excellence and versatility of their shows have led them to become a reference for contemporary puppet theater.

After numerous, already highly succesful, productions in their early years, (Sypnosis, in 1985, followed by Trans, in 1990, with more than four hundred performances in Spain, France, England, Germany, Switzerland, Austria, Italy, Greece, Poland, Bulgaria, Cuba, Morocco and Iran), in 1997 Etcétera produced Prokofiev’s “Peter and the Wolf” with the Orquesta Ciudad de Granada. Premiered in 1998, again with the Orquesta Ciudad de Granada, their production of the comic opera “La Serva Padrona” by Pergolesi was selected to be programmed by the Gran Teatre del Liceu, Barcelona. In 2001 they premiered the first phase of “The History of Babar” by Poulenc, with the eminent pianist Emmanuel Ferrer-Laloë, as part of an educational project. With “Peter and the Wolf”, Etcétera received an award in 1999 for Spain’s best children’s show. Etcetera, in collaboration of the Junta de Andalucía, co-produced the show “Dreaming the Carnival of the Animals” with the Gran Teatre del Liceu in Barcelona, a great critical and commercial success. Their latest production, “El Retablo de Maese Pedro”, using puppets that occupy the full stage of an opera house, was co-produced with several opera houses in Spain and constitutes one of their most renowned productions.