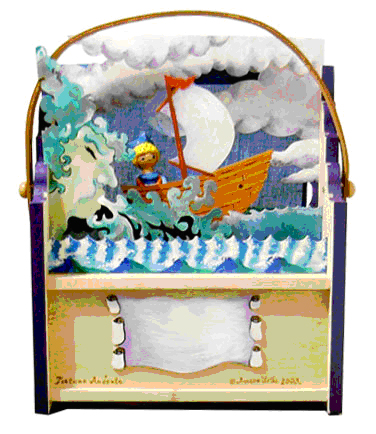 festivÀnima is a puppet and wooden theatre construction workshop. The theatres, with stage, backstage side guides – which provide a fly system that permits different perspectives from sequences of changeable two dimensional illustrations -, front curtain, backdrop, poster, written prompt and dressing room, offer – in miniature – the possibilities of the tradicional theatre on a 1:1 scale. The miniature theatres of festivÀnima, in addition to being an artistic project, provide enormous opportunities for play, improvisation and theatrical amusement.

festivÀnima originated in 1999 in Colombia, under the name Mireaver, and was started as an artistic endeavour by Jimena Uribe, both as a parallel activity to her professional career and as a game shared with her children. Jimena is an architect, and in the year 2000 one of her illustrations was included in a show representing Latin America in Utopia at the XXVII World Congress of the IBBY. Since then, she has combined illustration, architecture and design to create the miniature theatres, scenery and puppet characters, while sharing her experience and playful concept of life through workshops on fantastical drawing, recycled toys, and origami toys. She took part annually until 2007, in Expoartesanías, in various book fairs, and in the Persian Market at the Iberoamerican Festival of Theatre, Bogota. In Catalonia she has participated in several craft fairs and puppet shows.

“The Teatrinos have been a window through which I can let myself fly every day; they have confirmed me as a designer and, increasingly, as a puppeteer, storyteller and dreamer by profession.” J. U.