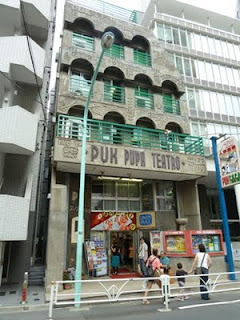 The PUK Puppet Theater celebrated its 40th Anniversary in November 2011. Standing at the heart of Tokyo, in Shinjyuku, the theater was Japan’s first modern theater built specifically to stage puppet plays.

PUPPET THEATRE PUK (LA PUPA KLUBO in Esperanto) was founded by the late Toji Kawajiri, the elder brother of PUK’s Artistic Director the late Taiji Kawajiri(1914-1994), in 1929, the same year as UNIMA foundation. PUK being an artistic group based on free-expression and anti-war ideals, its activities were mercilessly opressed and perspected by the authorities of those days. PUK had to change its name several times and lost many of its members before and during the World War II.

PUPPET THEATRE PUK started, right after the War , its free artistic activities and then grew up to be a big groupe of more than eighty members and owing its Theatre House is actually the meeting place of puppeteers. PUPPET THEATRE PUK has three main sections – Puppet Troupe Section, Theatre House Section and TV Section. These sections are, sometimes independently, sometimes collaborating each other, organising various activities.

Several troups, being and small, are permanently touring all over Japan. PUK goes abroad too. PUK already met people of Romania, Hungary, Bulgaria, Czecho,Slovakia, Germany, Poland,Australia, Canada, USA, Mexico and so on.

PUPPET THEATRE PUK started its creative activities with marionette technique. However, PUK soon enlarged its technical range adapting hand puppet, rod puppet, shadow puppet, Japanese traditional puppets and many others so as to puesue a wider possibility of theatrical expression. As Japan has a long and various traditional and folk puppetry trends, PUK is very proud of making use of those cultural treasures in modern creation.