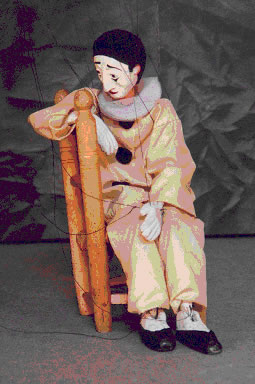 His beginnings as a puppeteer go back to the mythic company Grupo-Taller de Marionetas led by Pepe Otal, when this company was located in a squattered house in the district of the Barceloneta in Barcelona. After having been a member of this group, he became independent and created the Col·lectiu d’Animació, with which he started his own path.

Since 1987 he has had the support of Susanna Rodriguez, a former dancer of the contemporary dance companies: Taba (1982-86), Saez-Taba (1986-87) and Traffic Service (1988-89). Dean of the Catalan string marionette’s puppeteers, he is considered by the international critics as one of the best and most skilled European manipulators. He has participated in 242 Theater Festivals in 15 countries of three continents. In recognition of his career, he won the award “La Luna d’Argento 2004” in the International Festival of Puppet Theatre “La Luna Azzurra” in San Miniato (Pisa) Italy. He was a professor of the Theatre Institute of Barcelona during the School Year 2005-06. He also received the Award for the Best Solo Animation at the “11th. World Festival of Puppet Art 2007 “in Prague, the Czech Republic.

ROCAMORA TEATRE has created fourteen performances, some of them rather commercial productions whilst others were much more adventurous. Among its repertoire it is worth stressing emblematic works such as La Maleta (the Suitcase), Air Mail, Small Suicides and Soloists.