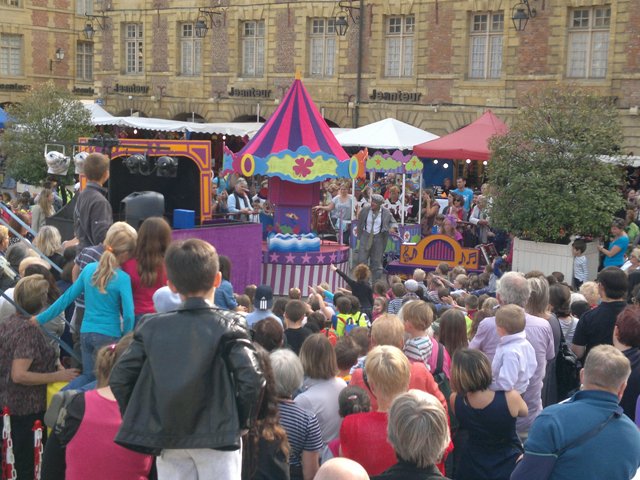 “Ángeles de trapo” is a family company, with more than 30 years of experience at the puppet theatre, composed by Julio Gallo (licensed at School of Fine Arts), and Iolanda Atalla (educational teacher and member of first group of theatre´s FURG in Brazil). The company has been recognized by high level of their productions during all there years, treating always to innóvate, to surprise the public, and to break down the schemes in the puppet theatre world.

Their last premier “Carousel travellers”, shows it, a visual theatre spectacle, with live music, that call for a complex technique of the automaton puppets. In september 2013, they participated at the World Puppet Festival in Charleville – Mézières, and french press commented thereupon:

“Refreshing, light, nice, pleasant, vivid, and colorful. “Viajeros del carrusel” of the Spanish company “Ángeles de trapo” is pure happiness.
The unexpected pops laughing children and also adults.
If we measure the success of the representation by the intensity of the laughter of children, then we would say that it has been successful.”