We cannnot end our Chengdu chronicles without talking about the Closing Ceremony. The reason is simple: if the Opening Ceremony stood out for its astonishingly spectacular nature, the closing one was more intimate, touching and artistically refined. The fact that it was celebrated in a theatre, the Southwest Theatre, doubtless explains why it was more contained, but it was in the idea itself for the show in which the brilliance of the artists and great theatrical intelligence of the stage director, whose name I don’t know, could shine. 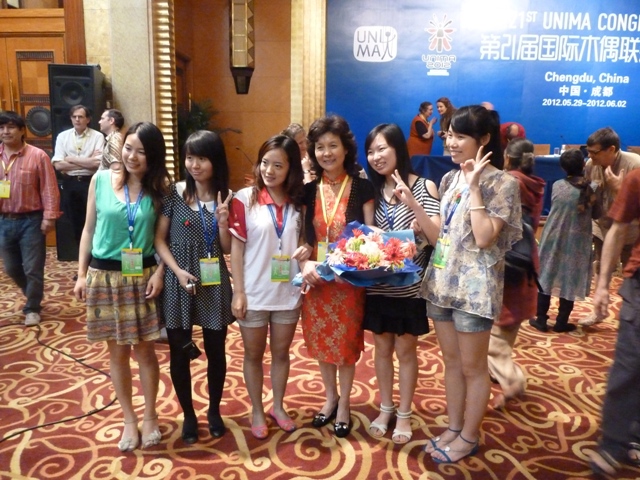 Mrs. Tang Dayu, Secretary of UNIMA China and organizer of the 21th Chengdu Congress, with some volunteers

There were the obligatory speeches, all well translated into English, followed by the awarding of prizes, which were copious, as a way of paying homage to the participating groups (65 companies from 45 countries of the five continents, and 36 companies from China, with a total of 700 performances). Incidentally there were two Spanish companies, both of which received prizes: The Teatre de l’Home Dibuixat, from Castellón, with Stone by Stone, and the company Yheppa, from Asturias, with AS, OS, @ S. There were also two companies from Portugal: Sa Marionetas – Teatro E.Bonecos with Tubic, and Trulé, Investigação de Formas Animadas with The Puppets’s Affection and Distraction. From Latin America there were the groups: Teatro de La Plaza from Brazil, with Stories with Wastes; from Mexico, Astillero Teatro with Onomatopeyas; and from Ecuador La Espada de Madera with The World is a Tissue. 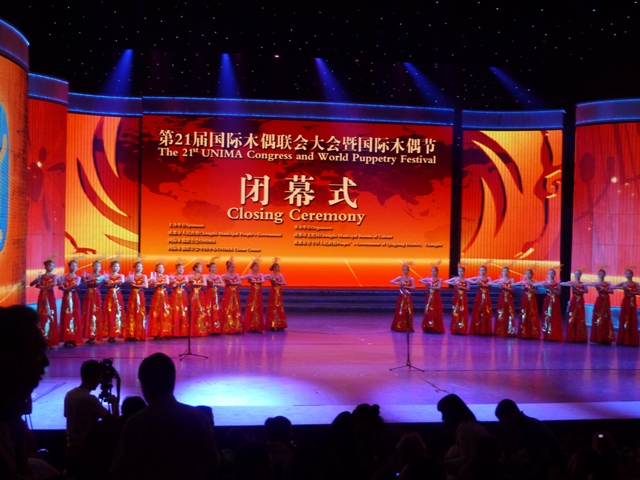 After the prizes, the performances began. From the start, a surprise: as the microphones were removed and the gala began, from the orchestra pit a group of beautiful young women emerged dressed in red, to give a touch of good taste and static beauty to the proceedings. Then, two presenters introduced each scene or tableau; there were light and scene changes for each different piece, produced by three immense video screens which surrounded the stage.

The development of the show was along similar lines to the opening  ceremony, but the the greater containment provided by an enclosed space allowed greater concentration of the public’s attention so that the images, music and choreographies unfolded to their full effect. The first scene presented an aetherial body of dancers dressed in floral costumes, who guided on various manipulators of rod puppets representing flame throwing warriors and gods. The presence of the manipulators who had the discipline of dancers, and their skill with the difficult and voluminous puppets were very impressive. And so began a constant exhibition of, always impressive, skills. To the puppeteers of large dolls were added glove puppeteers who, organised in pairs, staged the classical battles of warriors to the  rhythm of music. At the end, they were joined by four string marionette players, most likely from the El Cairo Marionette Theatre company, with typical puppets from that city. 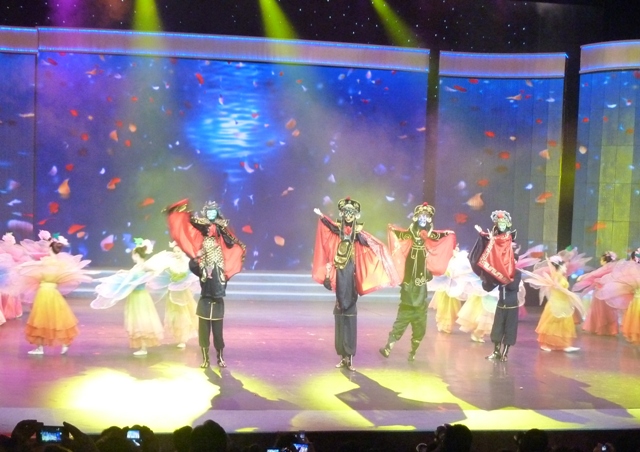 Thus began the alternating and crossing of puppets from China and those from the West, which was one of the stage director’s great achievements. In the following scene another troupe of beautiful dancers appeared, this time accompanied by a manipulator of the Teatro del Drago, from Italy, with a Pinochio who moved in his totally uncoordinated fashion, in stark contrast to the harmonic movements of the dancers. It was one of the most magical moments, given the contrast of the two worlds, perfectly synchronised and performed. To this image was added a closed box with a “porthole” for shadow puppets, in which a beautiful Eastern dancer appeared, magnificantly manipulated and displaying a wealth of exquisite details. The lighting and images projected on the large screens were a magical accompaniment to this high voltage poetic sequence.

Another key moment came at this point, when a large rod puppet, beautifully manipulated, began to paint lovely Chinese letters on a canvas. At the same time, the panda bears – large figures with their porter inside -, who had also been present in the opening ceremony, reappeared. They performed amusing scenes while one of them, converted into a rod puppet, painted a child’s drawing on another canvas. 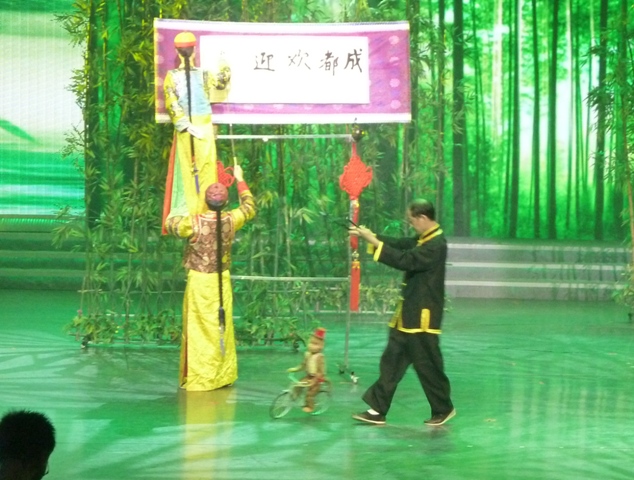 The group was joined by a string marionette player with a complex marionette – a monkey riding a bicycle. I already knew this number, created by the Puppet Master Huang from Quanzhou, which amazed me when I saw it in 1990 in the festival held in that city. Here it was again, with a younger but equally competent puppeteer, in the middle of the panda bears. Being put in the middle of a busy scene reduced its impact a little, but nevertheless we were able to enjoy this extraordinary puppet that got on and off the bicycle which never stopped circling around the puppeteer, did handstands on the bike and leapt across it from one side to the other; and the entire manipulation was done with the system of the flat cross of the Chinese technique, from which the strings hang down. Highly impressive!

The next scene was played by animals; tigers and lions that were very well characterized, and white swans manipulated by the puppeteers of the American company Hearter Henson’s Ibex Puppetry. One of them pulled out a huge bird which, like a comet moved by a long rod, almost flew over the audience. They were beautiful moments that the stage director completed with a profusion of glove puppets filling the long puppet theatre installed in the middle of the stage.

A complete scene followed, performed by two western soloist puppeteers who were excellent manipulators, – though I don’t know where they were from -, with a puppet which appeared out of a large chest and whose double appeared in a dream about Death. And, to end, another choreographed scene with dancers wearing the elegant feathers of the Monkey King on their heads who provided a backdrop for the appearances of the various artists who had participated in the gala, with the abstract orange-coloured puppet belonging to the German company Stabfiguren, together with other artists who joined the final group, carrying puppets of every kind. The finale, like the Opening Ceremony, brought all the puppeteers and dancers together on stage, all waving in a joyful and festive atmosphere.

Without a doubt, the great merit of the gala was the wisdom of combining such different companies, bringing them together in groups according to music, colour and images.  And, once again, the virtuosity of the manipulators from China, as well as that of some other participants, is what shone out; with a commitment to their work, a vitality and enthusiasm that were technical and contained, and which demonstrated the degree to which the Chinese puppeteers have managed to unite distinctive aspects of their tradition –  rigour and maximum discipline in terms of presence, movement and manipulation – with more modern theatrical ideas; in this instance they were put to the service of a festive, official event but were not any the less artistic or impressive because of that.

The generosity and the tremendous outlay made for the Opening and Closing Ceremonies were, without a doubt, one of the distinguishing features of the Festival. A type of show that is usually assiciated with events that are more media oriented, and for larger audiences, (the Olympic Games, World Fairs and Exhibitions, etc.), they therefore made a great impact on the puppeteers from the West, accustomed to more modest celebrations. The organisers of the Chengdu Festival achieved, with top marks, their aim of impressing the audience and at the same time strengthening the image and standing of Chinese puppets. It was a very well deserved success. 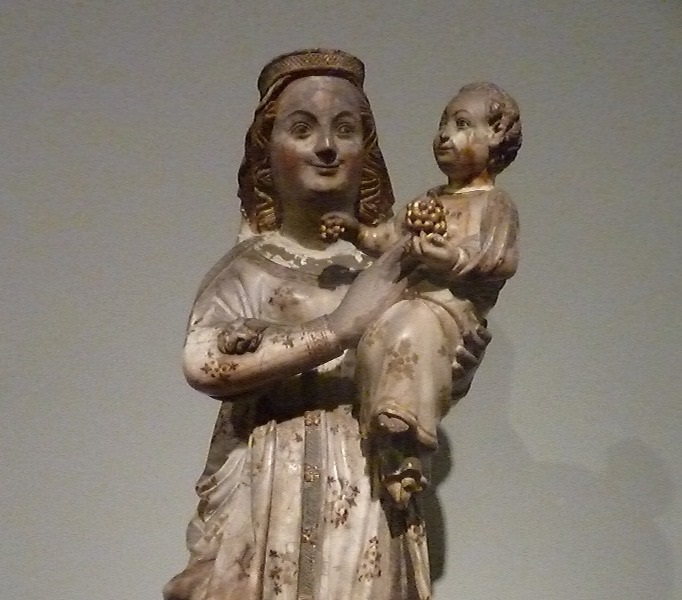