Luis Vieira and Rute Ribeiro, directors of Festival Internacional de Marionetas e Formas Animadas of Lisbon – FIMFA Lx, had reserved very special shows to close 2012 edition. ‘Diagnose: Hamlet’, by Miquel Gallardo, and ‘La música pintada’ (‘Painted music’), by Joan Baixas, were good representatives of the high quality of Catalan artists. Not a surprise, considering Baixas’ long career, started in the late 1960s along with Teresa Calafell under the name Teatre de La Claca, with whom he got a worldwide success with the show ‘Mori el Merma’ (1978), in collaboration with the painter Joan Miró. And not a surprise either the quality of Miquel Gallardo’s last production as he had already dazzled with previous works, like Molière’s ‘The Miser’ with Tabola Rassa or ‘Don Juan. Memòria amarga de mi’. 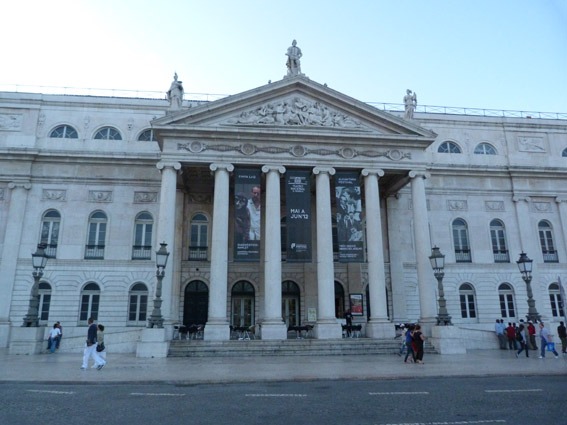 Gallardo’s Companyia Pel Mànec performed on Friday at the Teatro Nacional Dona Maria II. If he would have known that in advance, he would have been “even more nervous”, he stated. The fact is that since ‘Diagnose: Hamlet’ was presented one year ago he has only played it about thirty times —“very few”, he said, “but now times are changing and contracts have reduced dramatically”. He made these statements in a talk with the audience after the show, in which the artist and Luis Vieira discussed with all the people about theatrical creation, techniques and performing. Miquel Gallardo stated: “One can never finish a show in the rehersals; the contact with the audience makes it. Now, after thirty times I have played this show, I believe it is completely ready. Not perfect, just ready.” 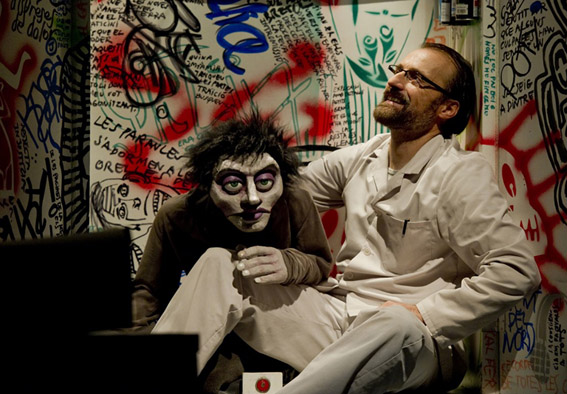 Max Flaubert and Miquel Gallardo as the Doctor.

‘Diagnose: Hamlet’ is not another version of Shakespeare’s drama but rather a use of the text in a new plot. Max Flaubert, a puppet, is a teenager who has decided to isolate himself after his father died and his mother married his uncle. He is under psychiatric treatment with his puppeteer, Miquel Gallardo, but five years after the decease, he still refuses to be helped. Taking as a contemporary source of inspiration Japanese youngsters who close themselves in their rooms to keep away from the pressure of parents and society, the hikikomori, Max Flaubert creates his inner world made of Shakespeare’s readings, music and internet. The relation between him and the doctor is, in fact, the real plot —puppeteer’s split personality. 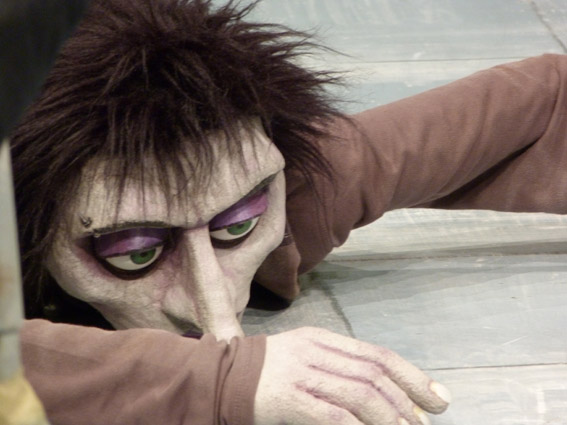 So Gallardo decided not to focus much on Hamlet’s doubt, but on the possibilities of this character of being two. If in Shakespeare drama, Hamlet uses theatre and comediants to reveal the truth on his father death, now Gallardo uses ‘Hamlet’ to talk about puppeteer double personality. Ironically, in one of the first scenes of the play, Max Flaubert’s mother (never called Gertrude), who is another puppet, sings the bolero ‘Puro Teatro’. In another scene, more dramatic, the doctor comes out of the closet where he is talking with Max at the same time, so one can see him double —projected in the wall of the room while he talks to his patient and out of the closet, making as tightrope walking along the stage. Many other details make this peculiar dramaturgy work out. Indeed, direction by Maria Castillo is just great. 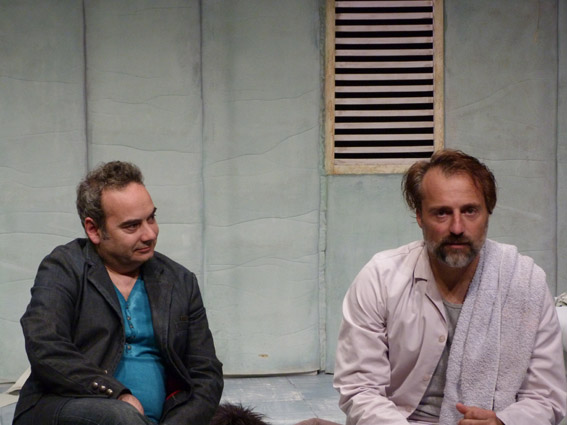 Conversation with Luis Vieira (left) and Miquel Gallardo after the show.

Miquel Gallardo manipulates Max Flaubert, his mother and Ophelia —who suicides during a Skype call. Though, the drama is not young Flaubert’s, who believes he is Hamlet, but the doctor’s. It makes the performance extremely difficult, as he is alone in the stage for seventy minutes and plays four different characters, besides he is manipulating three of them. Puppets are made by Martí Doy. They are one-man size, moved with one arm behind the head. After the show, Gallardo wanted to recognize the direct influence of Neville Tranter. Movements and dialogs are clean and likely, he makes it all seem natural, as if the puppets were actual actors.

Joan Baixas’ show ‘La música pintada’ (‘Painted Music’) has already been published in Puppetring’s brothers magazines Putxinelli (read here in Catalan) and Titeresante (read here in Spanish). Although we could see it in the Fira de Teatre de Titelles de Lleida, we remained impressed again for its naturality. Baixas is in a mature phase of his work that makes him extremely close to his audience and being able to tell such difficult stories as Maurice Ravel’s and Claude Debussy’s life and work. And he succeeds to do this for children! 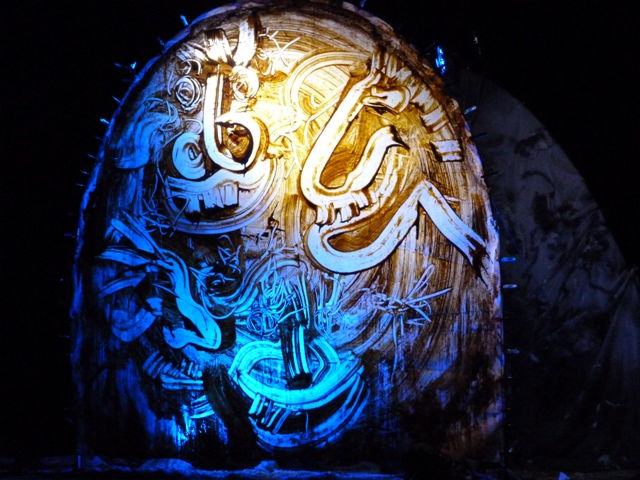 Ok, that is not exactly so. This is a play for children, Joan Baixas is so close and honest that reaches children easily, but also if they are of any age. He has a special magic that makes all audience be the same age —very young.

He performs it thanks to the way he tells the story, but also to the paintings in an illuminated screen while following the music of this two impressionist composers. Impressionism is, in fact, what he brings to the stage to make us feel pleasant mediterranean and exotic far east sensations. With ‘Painted music’, he openly exposes himself, his way of working and —probably— seeing life and art. It is a simple show, but the feelings remaining after seeing it are powerful and lasting. 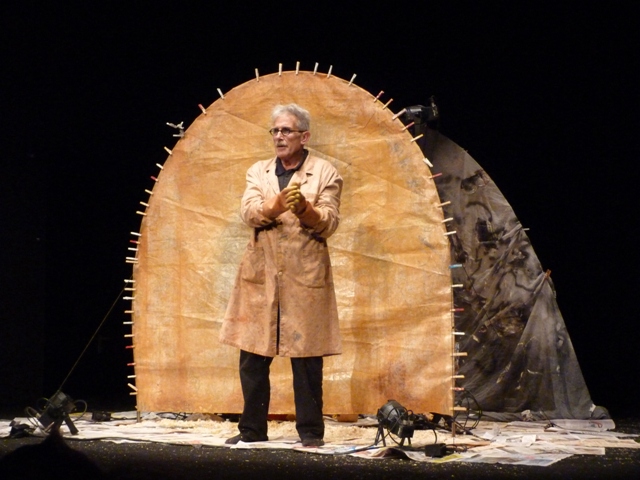 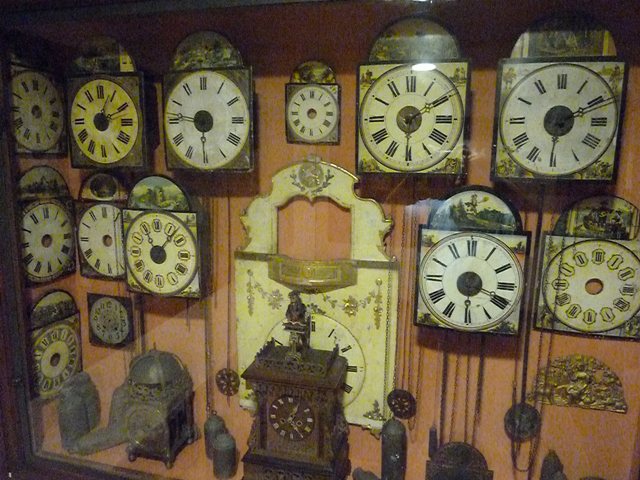