Heini Brossmann and his Theater Trittbrettl performed at La Strada Festival, in Graz, Austria, a very personal version of traditional Kasperl puppet shows (see this article about the Festival). This year is the 30th anniversary of this company, in coincidence with the 15 years of La Strada, so its Artistic Director, Werner Schrempf, asked Brossmann to do something new. The result is ‘Das Kroko Dicke Dil’, co-produced by La Strada. In this show, Kasperl faces a new difficulty and the help of the puppeteer and the musician, Peter Marnul, will be needed: the Crocodile, Kasperl’s antagonist, does not want to come out. They look for and finally find it behind the stage, but he cannot play, feels sick, has flu. This common situation calls for a common sense solution and allows Heini Brossmann and his company to give new options to the figure of Kasperl. 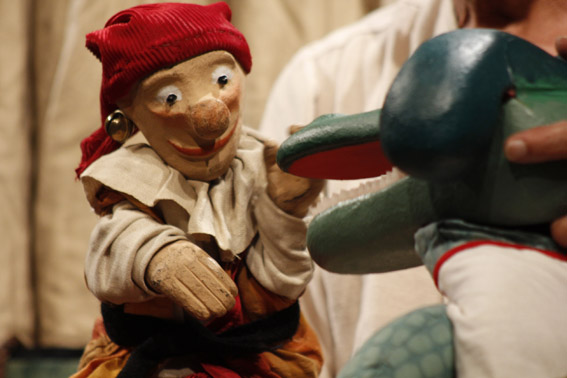 Even if ‘Das Kroko Dicke Dil’ is for children from 4 years old, the play is not moral and Kasperl is not exactly a kids friendly puppet. In some occasions, the puppeteer has to scold him because of his vocabulary —not severely though.

Indeed, Theater Trittbrettl takes the heritage of traditional puppeteers and uses it in a living theatre. When they started in 1982, they wanted to return to puppet theatre its political content and strength. They were a mobile theatre company that combined puppets and masks. In their play for adults ‘Kasperliade’, they used the figure of Kasperl to explore the relation with the past, the fear of death, history and the unconscious remainigs of Nazi ideology in current days. Now ‘Das Kroko Dicke Dil’ is definitely lighter, but there is also the will of bringing Kasperl to a possible situation in the present and keeping its substance. 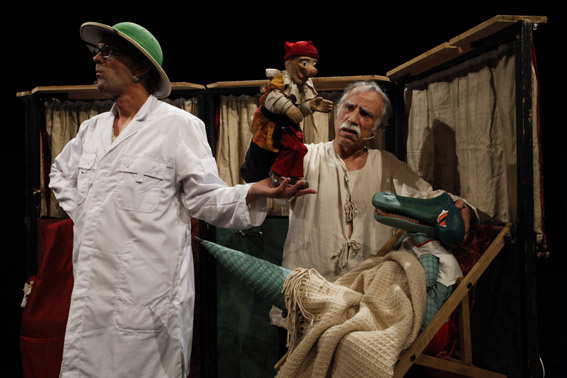 Kasperl realizes he actually needs his enemy —the Crocodile— to perform the show. And even if he is sometimes irreverent, he learns the meaning of mutual help, although he and the Crocodile are different. Ok, you may say in the end this is a moral play, then! —but this is not necessarily the most important in the show. The most important is the play itself. Based on speech and speaking jokes —that unfortunately I could not understand—, Heini Brossmann brings an experienced technique to stage. Besides, the search of the Crocodile behind the theatre —Brossmann and Peter Marnul turn it the other side around— opens the art of glove puppets to the audience.

The play is funny and rich. Among the components of traditional Kasperl brought to the stage there is the slapstick, although it is not used for slapping. (In Kasperl theatre in Bavaria and Austria, slapstick has been used more than in northern Germany.) Now Kasperl does not need to fight the Crocodile, so the components of the performance acquire a different sense. Certainly, there is a dialog between the past and an unexpected present, the tradition and eventual new challenges, even if they come from common situations. A good example of this dialog is when Kasperl-the-glove-puppet manipulates two smaller marionettes (czech style) of himself and the Crocodile.

Though Kasperl stopped following the traditional pattern of his relatives Punch, Guignol or Pulcinella and has been longer used for playing fairy tales instead, Theater Trittbrettl sets a fresh and contemporary play. Directed by Jakob Brossmann on a text by Heinz R. Unger. Puppets have been built by Peter Cigan. 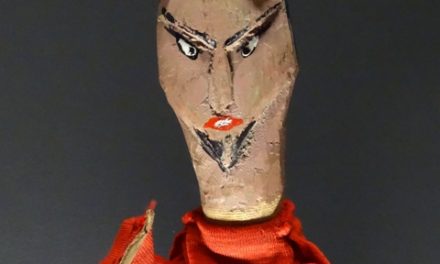 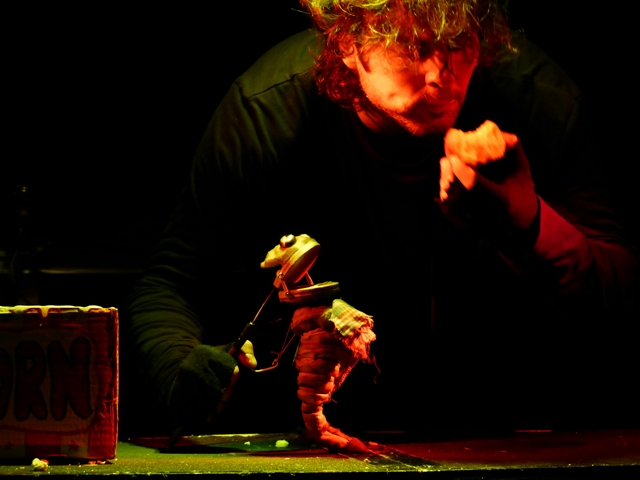