It is well known Pulcinella travelled all over the world and let many sons of him in several countries. Well, he is still travelling, exchanging many impressions and mixing himself up —that is why Bruno Leone has made the show ‘Viaggio misterioso con Pulcinella’ (‘Mysterious journey with Pulcinella’). It will be presented this weekend, January 11th, 12th and 13th at Sala Assoli in Naples, Italy.

Mysterious journey with Pulcinella’ tells the story of a puppeteer, how he meets Pulcinella and how they travel together around the world by tracing the history of this mythical character. Departing from Naples, they roam in Argentina, England, France, India, China, Siberia and all Russia, Persia, Egypt, Turkey, Crete, Hungary, Guatemala, Chiapas, northeastern Brazil, Cuba and Africa. In all these countries, the puppeteer discovers Pulcinella’s relationship with different characters from cultures apparently distant from each other. 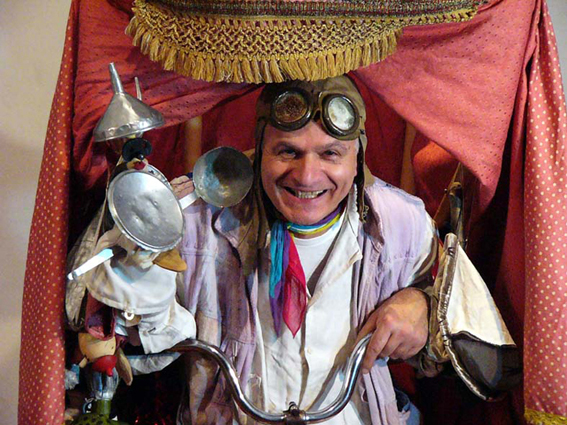 This is also a journey through time in search of the mysterious origin of Pulcinella, in which Bruno Leone becomes a kind of archaeologist who visits ancient Greece, Mycenae, ancient Egypt, Persia, India and the land of Mayans. He is not completely satisfied with his findings, though, so the puppeteer becomes a wizard-anthropologist and starts traveling in the depth of Pulcinella, into his mankind soul, awakening old forgotten memories, between earthquakes and archaic tsunamis, in a whirlwind of sea, sand, fire and air, where this character came off from, half man half bird, accompanied by the siren Partenope. Their message, this time, has to do with our future.

In the execution of the play, with the participation of Zena Rotundi, they use a variety of techniques and materials: typical Bruno Leone’s guarattelle, Neapolitan puppets, English, French, African and Chinese figures, Turkish shadows ans Indian and Persian puppets from the collection of historical material from the Istituto delle Guarattelle, directed by Leone himself.