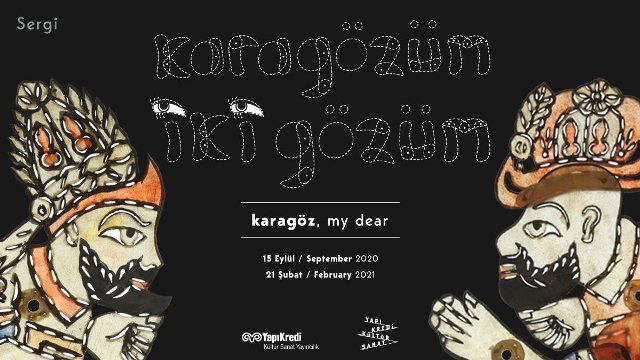 A new exhibition amidst the pandemic focuses on the traditional Turkish shadow puppet Karagoz and his cohorts. The exhibition has opened at Yapi Kredi Museum that one of the most important culture and art center in Turkey and the exhibition can be seen until February 21 at the Beyoglu, Istanbul location.

During the opening of the exhibition, the works of great master Ragip Tugtekin, was a very valuable teacher, from the museum’s own collection and selection of more than 15 contemporary artists works were used. Also the exhibition gives us a chance to take some answers: Is Karagoz still valuable in this modern world or are there any artists currently dealing with Karagoz? etc. We get these answers by curator Cengiz Ozek, who is the most famous living Karagoz artist and also recognized as intangible cultural heritage carrier by UNESCO.

“We chose to present the Karagoz figures in a darkened room. So step in, and try to imagine the shadow plays these puppets performed,” Ozek invites the small crowd in. “We would like you to see the attention to detail, the colours of master Tugtekin. The works really affect me. Hope they have the same effect on you, too,” he continues.

He points to the dyes and tools used to make Karagoz figures, as well as the raw camel skin as the canvas on which figures were painted and cut. There is also a Karagoz figure that can be played with against a dimly lit curtain, as if the museumgoer were the puppeteer.

“There are many aspects that affect Karagoz’s colourful world. There are the monsters, for example. They point to a relation between Shamanism and Karagoz, I believe,” Ozek says. “Witches, djinns, devils, cursed figures, transformed figures, are all on the wall”.

“One of the main features feeding Karagoz shadow puppets is folk tales, folk legends,” he enthuses. “Mermaids, dragons with seven heads, creatures from Islamic mythology such as Burak, the Vaq Vaq Tree…”

Ozek points at a map on the opposite wall displaying the many geographies that Karagoz and its variants are performed. “Greece, both [the Greek and the Turkish] sides of Cyprus, Turkey, Syria – definitely before the war– perhaps still, and from time to time Tunisia and Lebanon.”

Ozek takes the small crowd through the shadow play figures, explaining their dress changes through the ages that they reflect. “They reflected the fashion of their times,” he says.

“The end of the exhibition shows examples of other world cultures with shadow play in their repertoire,” Ozek notes. “Next to my Memluk reproductions, you will see an 18th century Chinese shadow puppet, shown along with modern Chinese shadow puppets. Then there are puppets from Indonesia, Thailand, India and Cambodia.”

The museum offers a fascinating view of the world of shadow puppets, and the accompanying book in Turkish and English, resplendent with reproductions of the shadow puppets, is offered for purchase as well. Also the book gives us a chance to take a look of some article written by some important people who work on puppets like Robin Ruizendaal, Toni Rumbau and Nabil Baghat.

I would be honor if I brought you one step closer to colorful world of Karagöz. 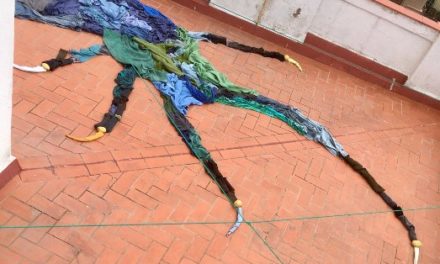