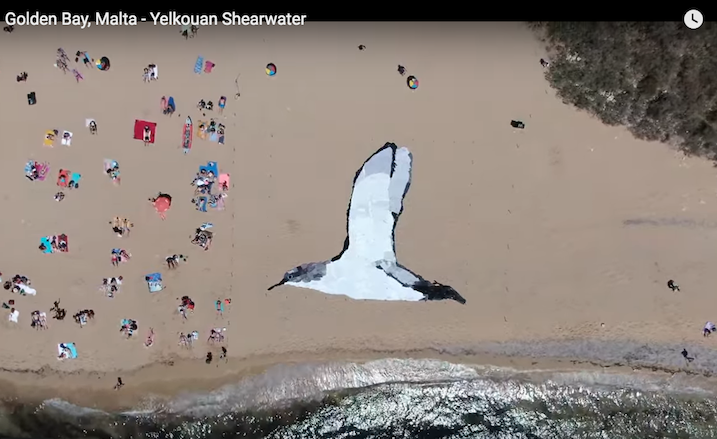 On 22nd May, International Day for Biological Diversity 2021, a group of Barcelona neighbours took part in an international arts project, withNature2020, devised by artist Emma K Thomas. The aim of the project was to highlight the need to take action in the face of the extinction crisis and protect the planet’s biodiversity.

On International Day for Biological Diversity, images were created in different parts of the world using cloth and clothing to depict an endangered plant or animal species from each region. Where possible, these were filmed by drone camera and videos were streamed live as each time zone entered 17:00 hours.

In Barcelona we represented the Aran rock lizard, from the Catalan region of the Pyrenees, by a single leg and foot. Colours were inspired by the blue-green tinge visible on the back of some individuals of the species during the mating season. 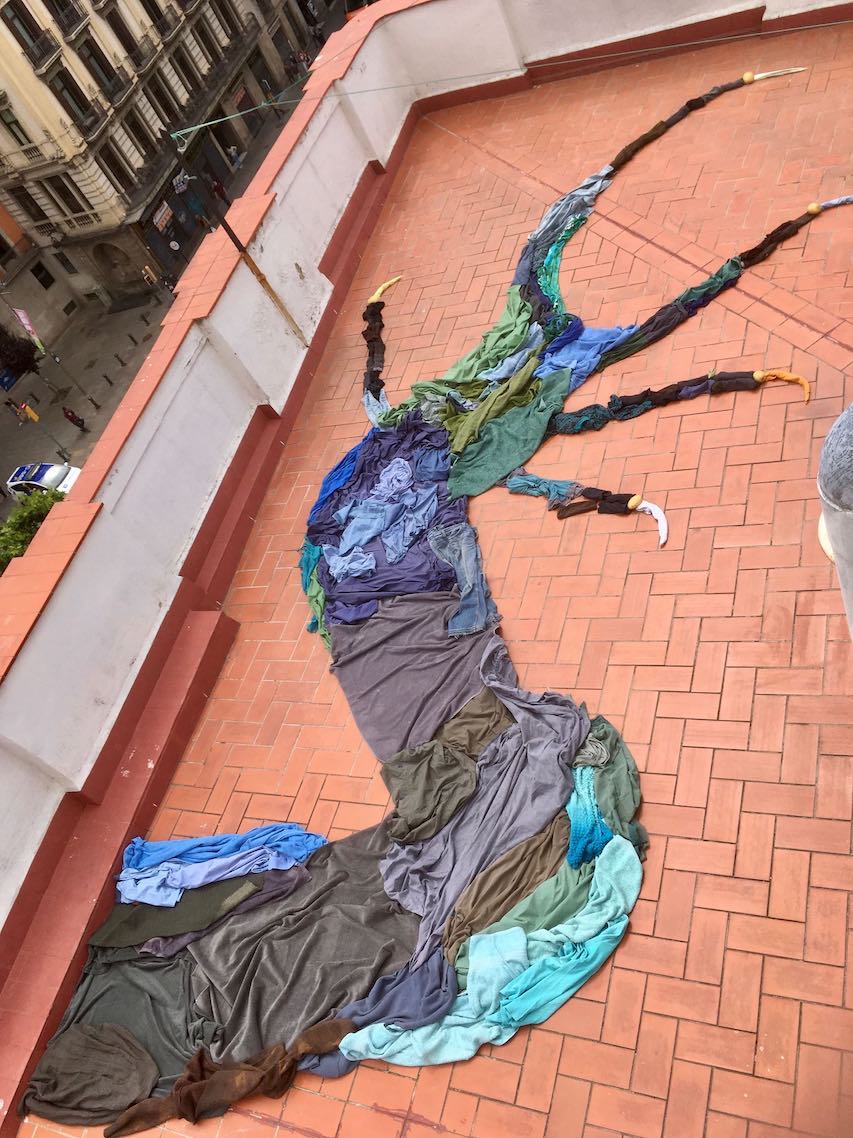 The Aran rock lizard (Iberolacerta aranica) is found in just one massif and its foothills, spanning the Spanish-French border, in the Val d’Aran and the adjoining Ariège. The lizard lives above the tree line from 1,900 to 2,500 metres above sea level. Hibernating for at least seven months, the Aran rock lizard produces a single clutch of eggs each year. As climate temperatures rise, the area of its terrain will inevitably diminish. The species has been threatened in recent decades by, among other things, the effects of acid rain, overgrazing, the presence of tourists and associated installations and vehicles, the activities of collectors, and pollution. Lizards are very sensitive to toxins, and pesticides on the land or in ingested insects can have lasting effects.

In Barcelona we worked on a smaller scale than other participating groups and without drone photography. The choice to focus, therefore, on a single leg of the animal led us to reflect on the fact that we humans share with lizards a common, evolutionary ancestral line. In fact, all ‘tetrapods’ or four-limbed vertebrates (including snakes, which lost their limbs, and birds) are descended from Sarcopterygii otherwise known as lobe-finned fishes, legged or walking fishes. Limbs, feet and hands stem from this phase of evolution. Living species are truly intertwined! 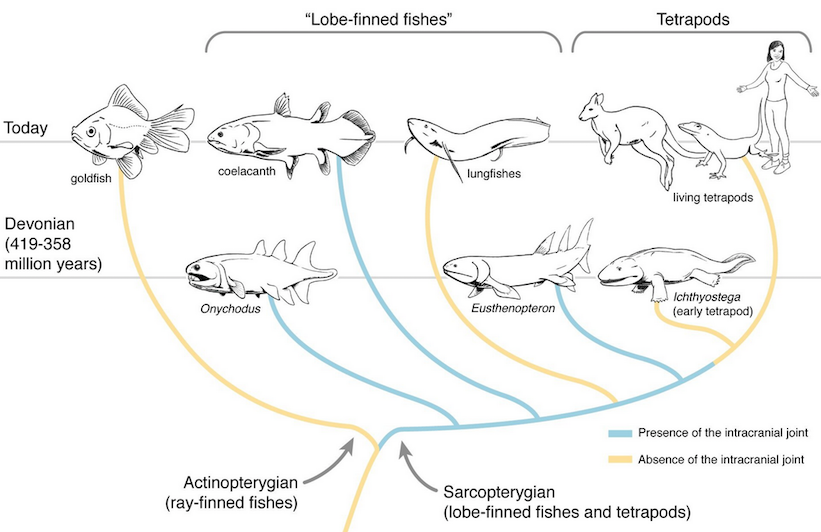 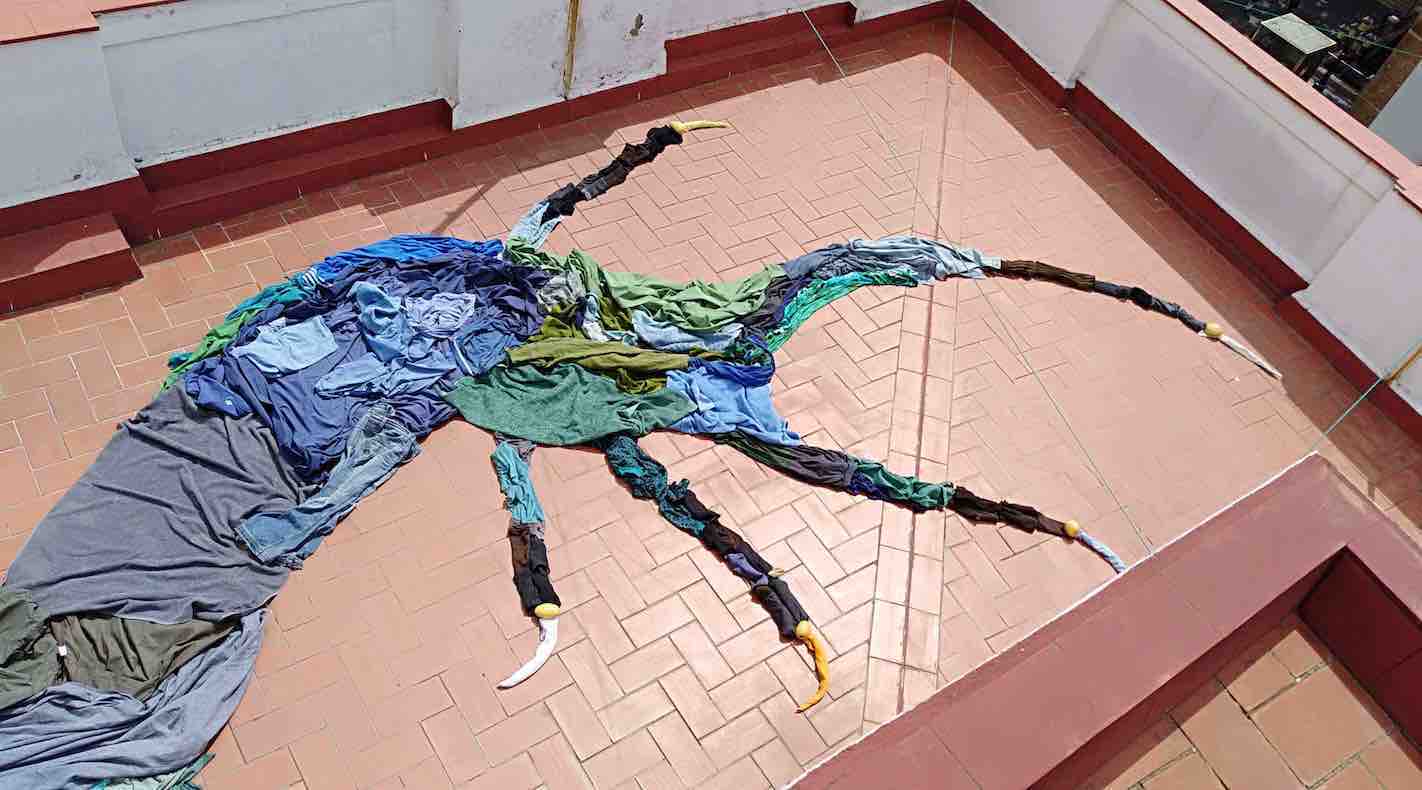 All of the following images are stills taken by Puppetring from drone footage posted online by withNature2020, following the event withNature2020 – A Tapestry of Species that took place on 22nd May 2021.

Amphibians are some of the animals most susceptible to pollution, habitat loss and climate change. Two amphibians were featured as part of withNature 2020, being the Great Crested Newt and the Manning River Helmeted Turtle. In line with the aim of the overall art event, young people were closely involved in these large-scale pieces.

The Great Crested Newt was designed and –despite pouring rain on the day– laid out in Northamptonshire (UK) by a team of young people in collaboration with Fermyn Woods Contemporary Art. 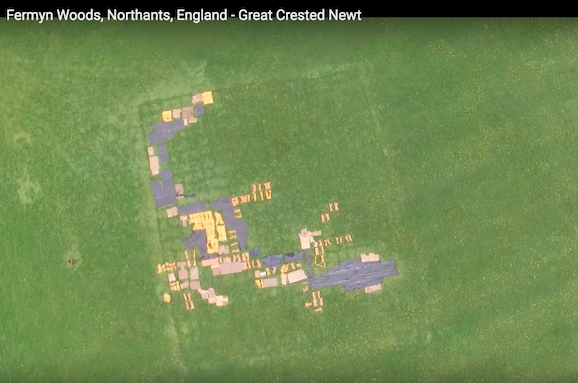 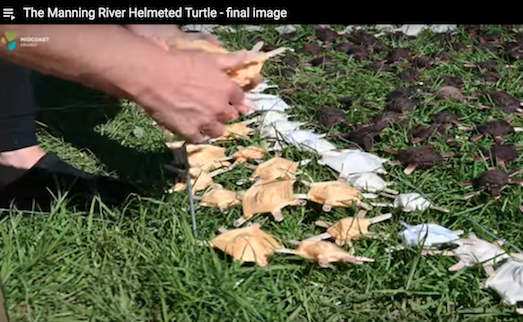 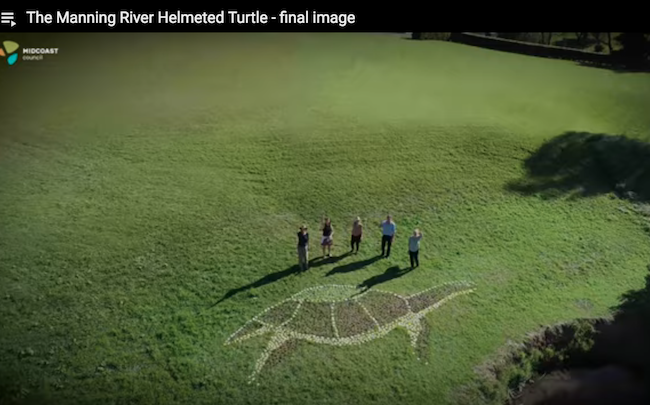 by Shona Wilson and collaborators

International Day for Biological Diversity was a windy day in Copenhagen, Denmark, where the Great Yellow Bumblebee was laid out. In an interview on “In the Studio” by the BBC, a programme which followed artist Emma K Thomas, she jokes “The thing is, the bee wants to fly!” She also points to how the image is animated, in a different way, by the overhead drone.

Clothing and shoes (note the shiny lower half of the bumblebee’s legs) have often been used in art to suggest the absence of those who have worn them. In all these artworks, objects make reference both to the potential loss of species and to what this may mean for today’s children and future generations, while also suggesting absence due to the pandemic. More personally, Emma K Thomas talks in the BBC’s programme about her own experiences of emotional loss at a young age and her relationship with nature, and the part they played in the conception of this macro art project. 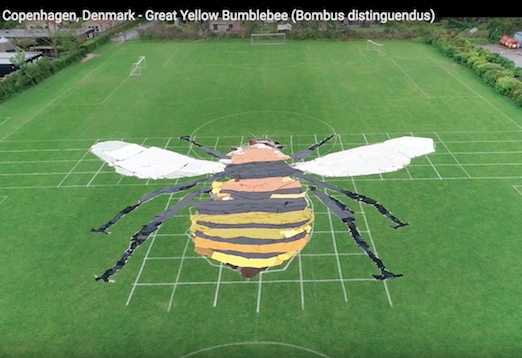 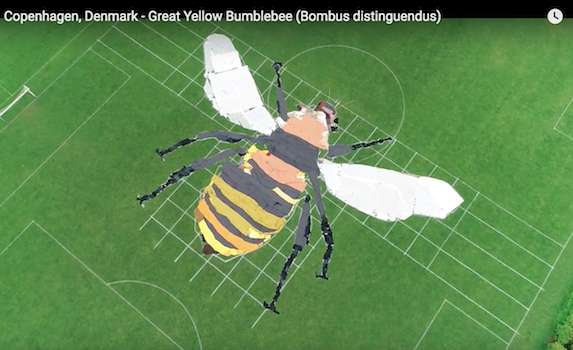 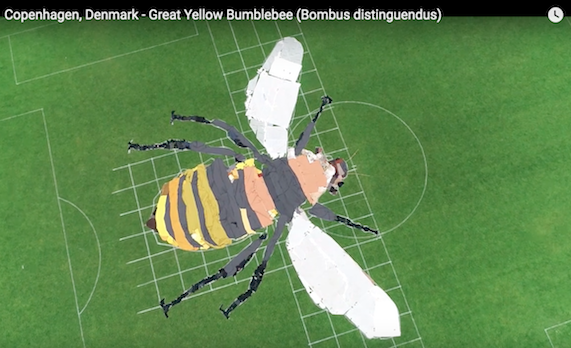 by Emma Thomas and team; filmed by Christian Josef Koppl

A second insect celebrated on the UN’s International Day for Biological Diversity was the Silver-studded Blue butterfly, native to Cornwall and other, mostly southern areas of the UK. This was another project involving school children, and artist Pip Bryson speaks in a video about various local bodies that, working in concert, helped make participation possible: Perranporth School, Cornwall, England; Cornwall Butterfly Conservation; Dynamic Dunescapes; and the Cornwall Wildlife Trust. 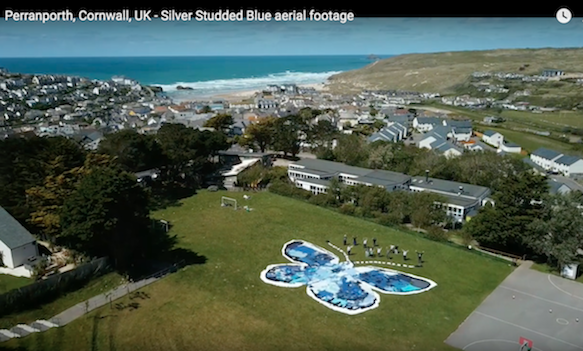 by Pip Bryson and team

Over the sea in Ireland the Curlew was created at Trinity College, Dublin. We show a close-up view of some of its constituent materials, followed by the whole picture. 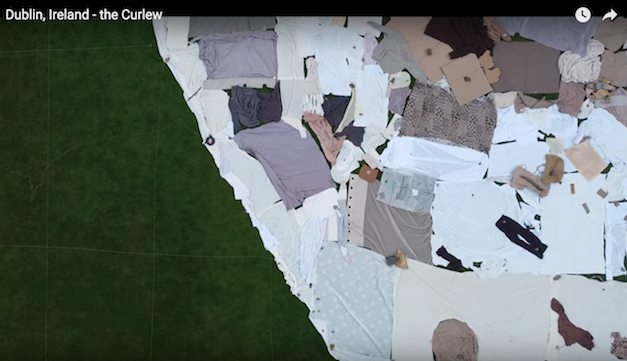 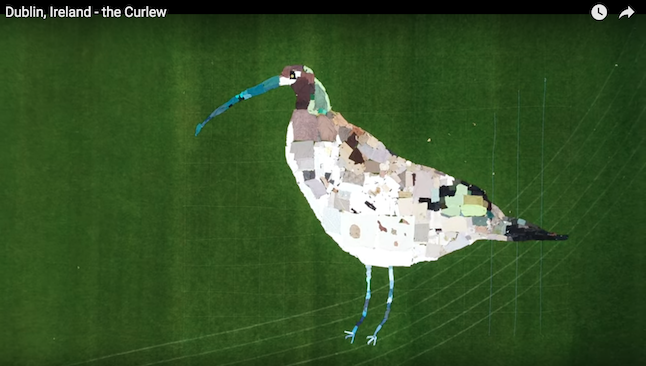 In Norway the creators opted to employ plastic objects that pollute the seas and/or instruments used in fishing, to portray the Polar cod. As explained by Georg Skaret in a video on withNature2020’s YouTube channel, the polar cod is the key species at the middle level of the Arctic food chain. 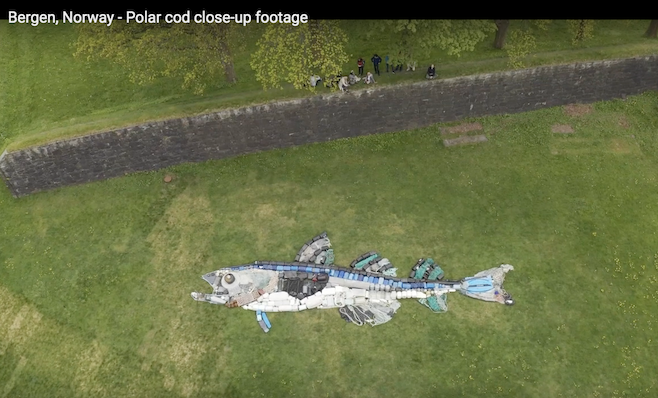 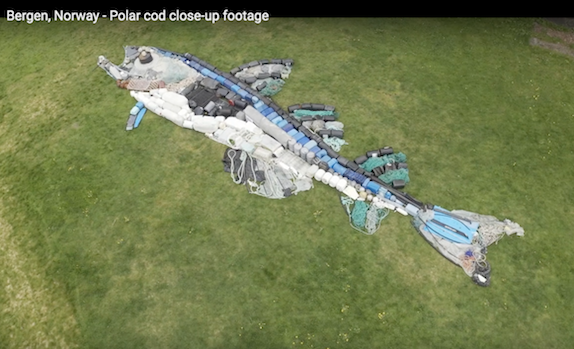 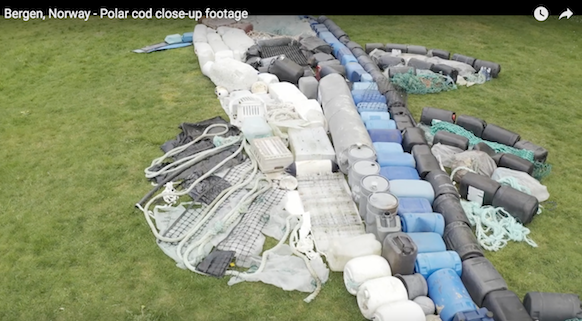 Examples of spectacular, rapidly dwindling flowering plants created for withNature2020 were the Ngutukaka (or Kakabeak in English) from Aukland, New Zealand, 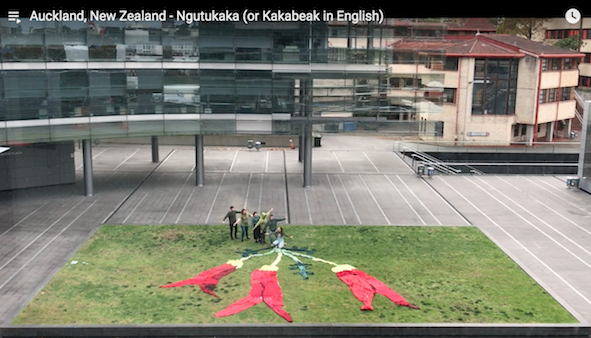 by Georgia Mae Pringle, on the campus of the University of Auckland

and the Golden Paintbrush from Lakewold Gardens, Canada. 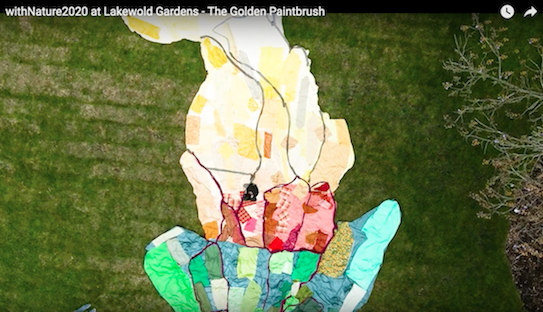 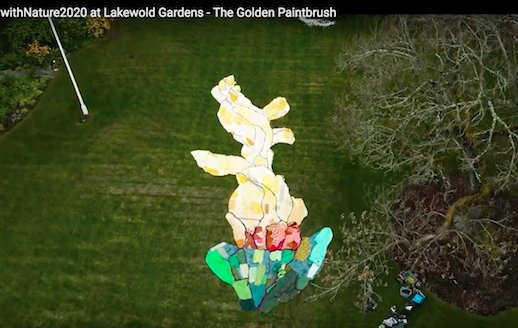 by Kate Cendejas Thun and team; film by Brandon Lambeth

The single endangered mammal depicted was the Scottish Wildcat, looking up at us here with its yellow eyes. 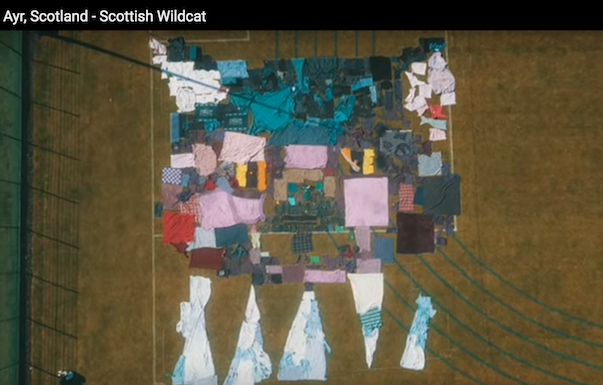 created by a team coordinated by the Little Art School, Ayr, based on a design by Nathan Connell;  drone pilot Karl Hartmann

The Northern Muriqui monkey in the Brazilian state of Minas Gerais was to be included in withNature2020 but, as Covid-19 made it impossible to produce a giant image, children sent drawings instead that were displayed virtually. Joanne Robinson of the Little Art School created drawing tutorials especially for groups in this situation. The curious White-necked Picathartes bird from Ghana was present, also, through drawings and comments by students shared via video.

Returning, then, with the Picathartes to birds, the Dalmatian Pelican was represented in Bulgaria in two ways: firstly, with drawings by schoolchildren, which have been compiled into a lovely slideshow and, secondly, following withNature2020’s original pre-Covid-19 proposal, albeit with reduced numbers, by people wearing coloured clothing standing in formation. 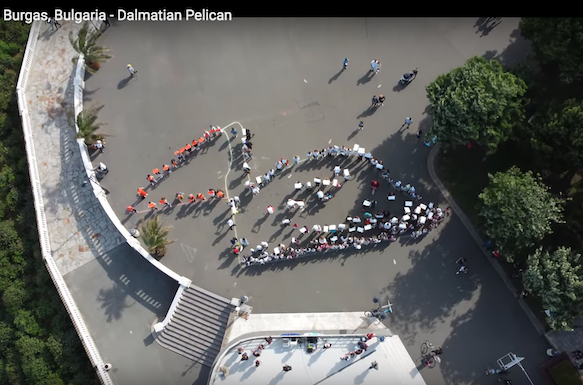 by the Bulgarian Biodiversity Foundation

In the UK once more, in West Yorkshire, an image of the Cuckoo was created at Stirley Community Farm by young artists from The Children’s Art School, Holmfirth. To give numbers in just a few cases, according to the British Trust for Ornithology, cuckoos have declined by about 65% since the 1980s. 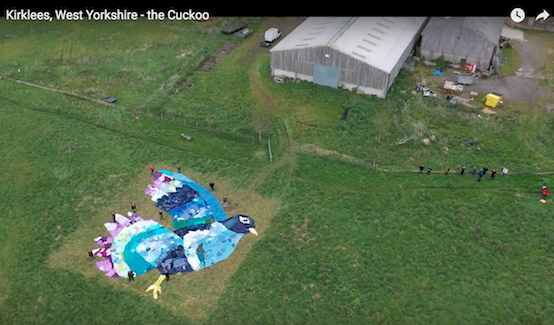 by The Children’s Art School, Holmfirth 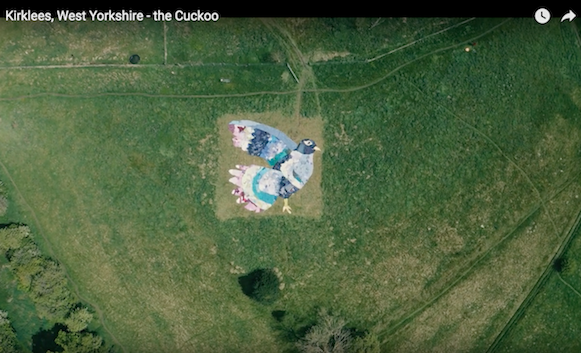 The Yelkouan Shearwater, created in Malta, seems to be lifted above the sand and flying over the beach, halfway between the drone’s own bird’s-eye view and the people sunbathing on colourful towels beside a glittering sea.

The image was produced in a collaboration between Birdlife Malta, with Alice Fantin as lead contact, and Il Majjistral Nature and History Park. Tamsin Caruana and artist Jeni Caruana were involved in the laying out of the image and drone filming; editing was by Alice Tribe and Nathaniel Attard of Birdlife Malta. 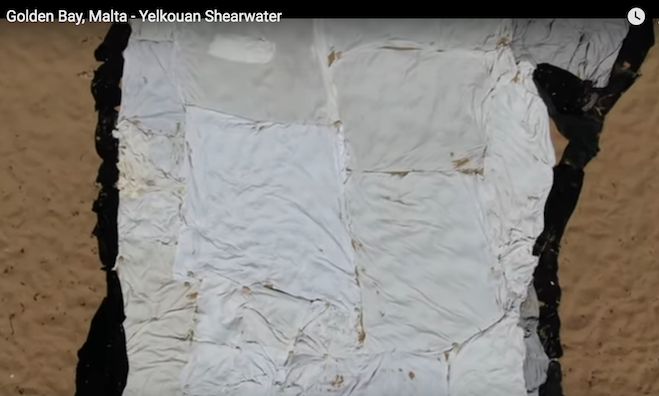 by Birdlife Malta in collaboration with Il Majjistral Nature and History Park; see above for individuals

The final example of these magical large-scale images, created from the very stuff we wear or handle on a daily basis, is the Red vented cockatoo or Katala from the Philippines. As few as 1000 individuals of this member of the parrot family survive. The Katala has been decimated by poaching and trafficking for the pet trade, and currently the greatest threat to its survival is habitat loss. The remarkable work of conservationist Indira Dayang Lacerna-Widmann and her colleagues from the Katala Foundation brought this beautiful, highly intelligent bird back from the brink of extinction. The Katala serves, too, as a flagship species for the protection of other endangered animals, and for the promotion of biodiversity through active community involvement.

As a result of Covid-19, however, the Katala Foundation is feeling the effects of a worldwide reduction in funding for conservation work. The artwork was made by volunteers from the Centre for Sustainability, Philippines. 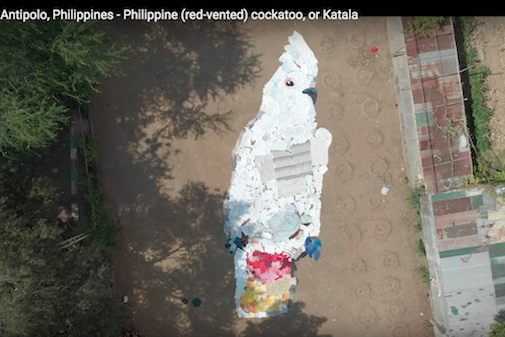 In close up, LEAP and CHANGE can be read on one of the garments. 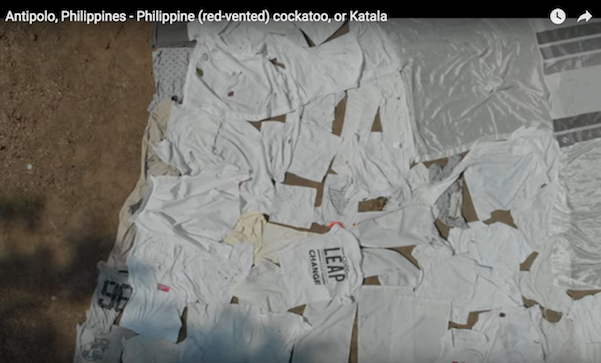 As COP26 approaches and world leaders prepare for a climate change meeting that must prove to be a turning point, ensuring decarbonisation, renewable energy and the creation of circular economies, the words LEAP and CHANGE call out for action that is bold, urgent and forward looking. 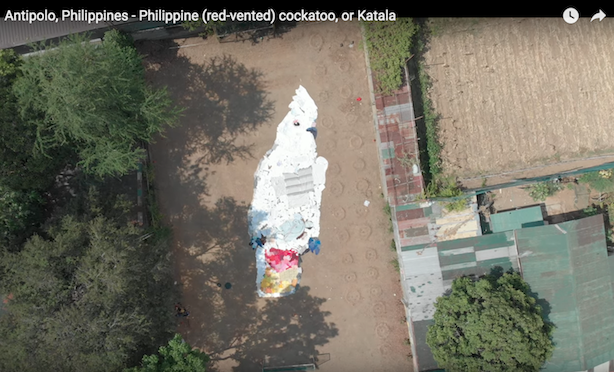 More information on the artworks can be found via the link below.

withNature2020 (see this YouTube link for drone videos, drawings and interviews all in one place): https://www.youtube.com/channel/UCNcOVyCtaFlM_hpImAcqe7w/videos?view=0&sort=da

BBC In the Studio, Emma Kathleen Thomas – A tapestry of species: https://www.bbc.co.uk/programmes/p09ndxz1

And for the evolutionary reference:
Finding Tiktaalik: Neil Shubin on the Evolutionary Step from Sea to Land: https://www.youtube.com/watch?v=yvDQCa7rleI