Somewhere on the outskirts of Thebes, a red-robed Oedipus paces a small section of desert, 0.5 x 0.5m2. Minutes before he’d escaped a polystyrene snowstorm, managing to lift himself above it by frantically cycling his legs. Now he seems trapped again. “I don’t know whether I’m running away or searching…” he tweets, on what appears to be a Russian version of Twitter, “…but the prediction presses me onwards.” There is the sound and lights of a helicopter hovering overhead; does it offer salvation, or is hunting him down? Oedipus plays it safe and escapes by hot air balloon.

This represents something of what Divisions is all about, a playful piece that explores the ambiguity of multiple perspectives, where the simple and the complex, the traditional and the modern, interact. It is the product of a creative encounter between artists of different disciplines, including puppeteers Maria del Mar Grañena and Joan Pascual Ros, electronic musician Paul Rose, and theatre director Beatriz Liebe. They are members of Associació Cultural Tuvalú, a Barcelona-based group that explores new possibilities for performance, applying techniques used in theatre to puppetry.

The idea “to narrate, through sound and images, a classic Greek tragedy using a futuristic hand puppet”, Liebe says, arose from a workshop given by iconic French puppeteer Philippe Genty in which Maria del Mar Grañena took part. She began working on Divisions in close contact with Liebe, and other members of the Tuvalú team, over an 18-month period.

Sophocles’ story of Oedipus the King, written in the 5th century BC, starts with a terrible plague that devastates Thebes. After visiting an oracle, King Oedipus discovers that he has haplessly fulfilled a terrible prophecy in the very act of fleeing from it, that of murdering his father and marrying his mother. Subsequently, he blinds himself with his mother’s brooch pin. The narrative details of Sophocles gory masterpiece are not all explored in Tuvalú’s production, which instead makes an “atmospheric reading” of Sophocles text. The piece also incorporates the words of contemporary Chilean playwright Andrés Kalawski as voiceover at the end, “the way (Kalawski) transmits images, his sense of humour and command of irony…” were inspirations, says Liebe, although, she stresses, Divisions “is fundamentally a sound and visual piece.” The use of imagery of Canadian theatre director Robert Lepage and French dance choreographer Philippe Decouflé were also influences.

While in previous Tuvalú pieces such as Agnus Lupus (2007) and Mon Amour (2008), puppets played small roles, hand puppet Oedipus plays protagonist in Divisions. The ‘puppet theatre,’ a 2,5m tall x 1,80m wide ‘wall’ from which panels are removed to display little rooms of 0.5m depth “is based on the aesthetic of video games or small format games,” says Liebe. Each ‘level’ is distinct in atmosphere, through meticulous use of lighting, sounds and textures. 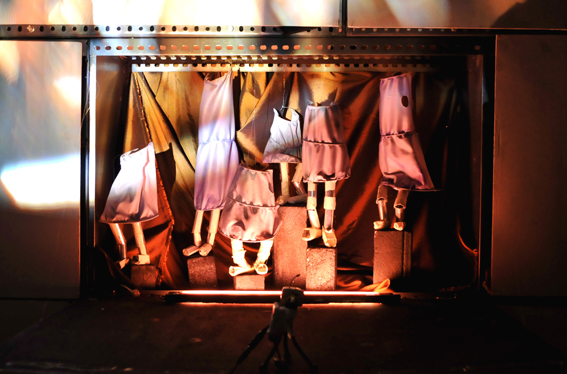 The art of puppetry, both as a skill and as a metaphor, is central to the piece. From the outset Oedipus is doomed, playing a losing game of hangman with his own name he is ‘booby-prized’ with a pair of articulate legs and dressed in kingly robes, as if to tempt him to begin his ill-fated search. The relationship between puppet and puppeteer is also explored. At times the puppeteer plays the ‘hand of god’ that saves helpless Oedipus from imminent doom, yet the puppet too has power in the form of a tiny camera fixed to his head. “It allows us to capture what the puppet sees real time, process it and project it onto the front of the set,” says Liebe. “The public sees from the puppet’s perspective.”

Divisions gives timeless themes, such as fate and free will and the search for identity and happiness, contemporary resonance and immediacy. The use of modern theatrical techniques and technology and the emphasis on live images and music, says Liebe, “makes each performance unique in some way”. 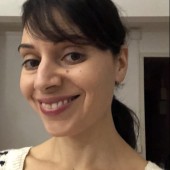 British journalist and arts critic Alx Phillips has written for a number of international publications, including Time Out (UK), Pulse (USA), and Spain-based English-language press. Alongside her passion for puppetry, Alx covers topics such as theatre, contemporary art, dance and experimental music.