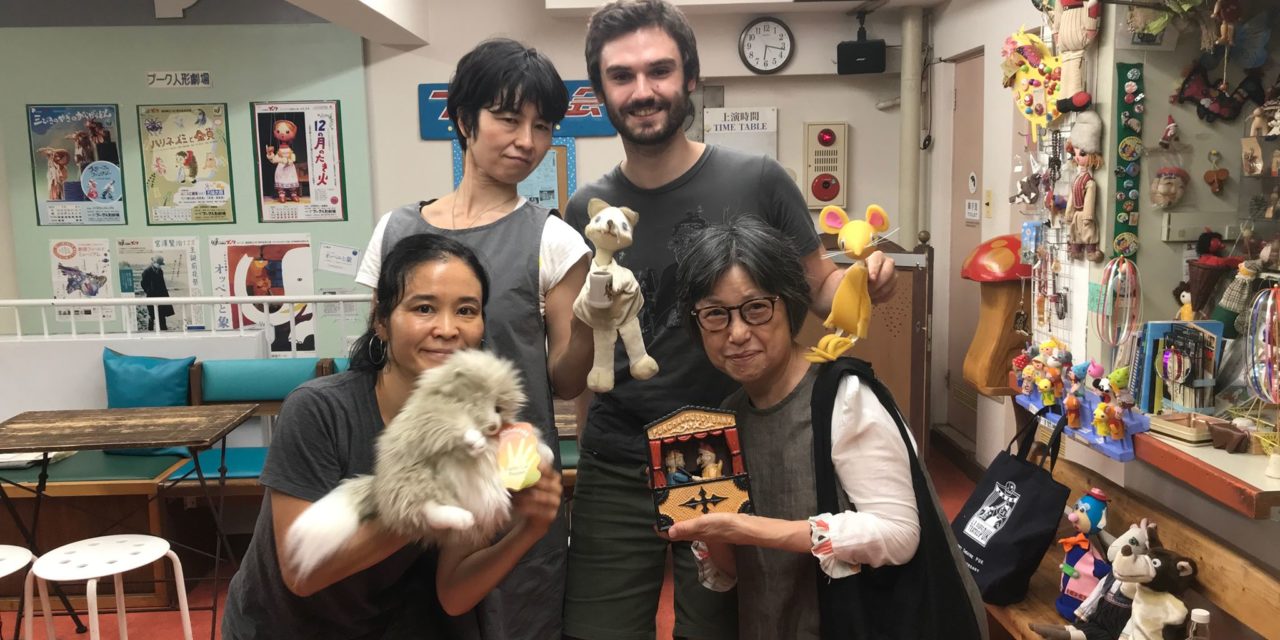 As an intern at PUK theatre in July and August 2019, I learned that PUK represents a modern, internationally networked understanding of puppetry. Throughout the world, the scene has grown together into a global puppet village. It was by participating in workshops by Bulgarian puppeteer Marieta Murphy and Neville Tranter (Stuffed Puppet Theatre, NL) that I have become aware of this myself. The international festival in Iida, which was part of the tour of “Babylon” and “Punch & Judy in Afghanistan” by Tranter, is also representative of this phenomenon.

I was given the opportunity to join that tour and to observe how the Japanese surtitles for Tranter’s pieces were created, projected live and adapted to the conditions of the venue. I would have liked to lend a helping hand to the surtitles myself, but despite prior promises I was not allowed to. This is not supposed to sound like a reproach, it rather leads me to think about the difficulties of intercultural communication, as delegating responsibilities and arranging simple appointments has been no easy task for both sides.

In 1970, French philosopher Roland Barthes described his experience arranging appointments (which took him a whole hour) in Japan: “In this hour one has recognized, tasted and received the whole body of the other one, has this body (without real intention) spread out its own narrative, its own text.” 49 years later, thanks to automatic Kanji recognition Apps for the smartphone and Google Translate, I didn’t need one hour to talk to my colleagues, but nevertheless feelings of frustration about not always being able to understand and be understood correctly were part of my everyday life in Japan. But, as Barthes points out in his essay, it is precisely because of those communication barriers and potential misunderstandings that meeting people from a different culture is an experience beyond the ordinary.

What will I remember from the internship? Certainly the little details like the pleasant working atmosphere in the small office of UNIMA, the good cappuccino at Kafo Punkto and the rehearsal visits of “Otubel and the Elephant”, being asked about 20 times how to pronounce the name “Albrecht Roser” correctly and the search for the little monkey from the program 大きなる子/ookikunaru ko (which is a popular Internet meme in the Spanish-speaking world and which I found out was originally a Studio Nova production!).

“Lucas – Why Japan?” I have been asked this more than once during the two months of my stay. To me, the answer is obvious: as a professional in languages and theatre, I’m interested in puppetry and Japanese – and thankful that I could discover both at PUK.

Lucas Franken teaches Spanish literature at the University of Bochum, where he is also working on his PhD thesis. In addition, he works as a project manager for the German puppetry company Half Past Selber Schuld and as a freelance translator for literary texts and legal documents (between German, English, French, Spanish, Italian, Catalan and hopefully soon Japanese).