Festival La Strada in Graz, Austria, turned 15 years this edition. This Internacional Festival of Street Art and Puppet Theatre has evolved in many directions. Whereas open air performances went into contemporary urban interventions, puppetry is more concentrated in traditional and local forms. Even being open to newer expressions —Neville Tranter’s Stuffet Puppet Theatre or mask theatre company Familie Flöz have been several times in La Strada— artistic director Werner Shrempf has changed the focus of the program from a more strictly puppetry festival into a mixture of languages. 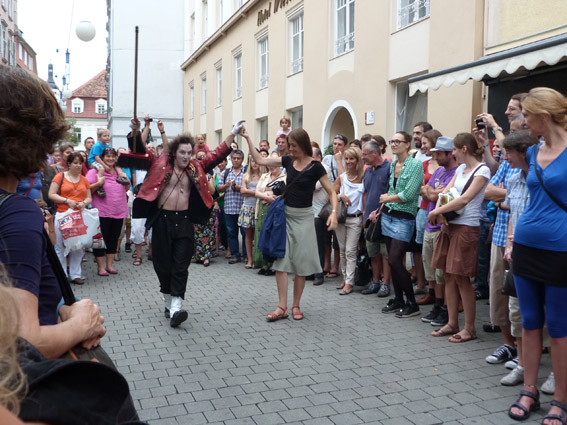 ‘Les Ravouilleurs’, by Jo Bithume. This is year is the 30th aniversary of this company.

He states: “In 15 years, what I did is to learn a lot. Now there are new forms to approach street arts and contemporary performing. 15 years is almost the same age than contemporary street theatre in Austria. Of course it started 30 or 40 years ago in Catalonia and France, and in general in the western countries of Europe, and indeed we took a lot from them.”

In fact, this 15th anniversary coincides with the 30 years of the French company Jo Bithume and the Austrian Theater Trittbrettl —this bringing on stage a peculiar version on traditional Kasper. 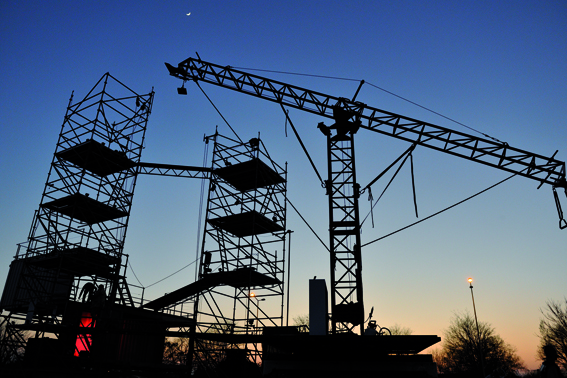 Jo Bithume performed their ‘Hello Mister Jo’ in the first edition of La Strada and now they are back with ‘Far West 2037’, a performance on a big structure about the loosing and finding of self in a not-so-far-future. Shrempf: “They are doing the closing show again with a total different concept and situation. Now very big shows in Europe almost don’t exist anymore or they are very commercial. This also changed. What companies like Jo Bithume did before was presenting their shows, whereas now we co-produce them for the city, with the city and in an international network where artists meet to create new work. Topics are changing too, so it is necessary to re-invent the meaning and the form of these performances in the cities where they take place.” 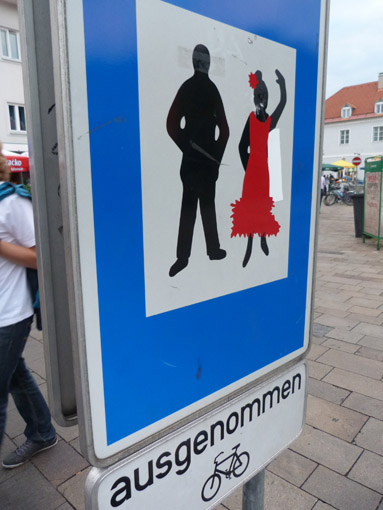 This traffic sign do not belong to the festival, but Gra is the city of design, and anything in the street easily becomes artwork.

La Strada joined an European network together with other 16 partners (see In-situ web page here). For some festivals, it is very important as they could not afford to produce certain shows without this kind of support. So thanks to this mutual help they push a stable circuit for artists and companies and co-produce shows.

Werner Shrempf likes to talk about “a kind of metamorphose of the cities operated by arts”. This could be a good definition of the type of projects supported by In-situ Network. And of course they take risks: “We like to support also work in progress projects. Besides, we explore parts of the city that are not the most well-known ones, or not only related with architecture. We help the productions that search in the inner part of the city, in how people live and behave there, in the life of people and how we live together…”

During this year’s festival, at the summit of Schöckl mountain, 45 minutes away from Graz, there was the installation ‘Harmonic Fields’, by Pierre Sauvageot’s Liex Publics. Produced with the sustain of local, regional and national institutions in France, it had also the support of Terschellings Oerol Festival in the Netherlands, that belongs to In-situ Network. 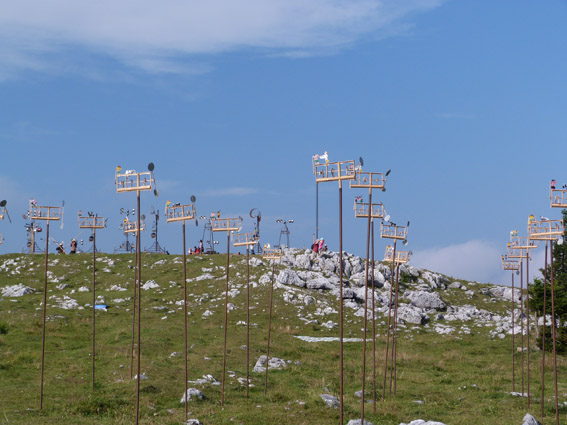 ‘Harmonic fields’ is one of this unique installations Werner Schrempf talks about when he says he has become more interested in contemporary art with a real impact in a public space. Schöckl mountain is a place for recreational activities where many families go to spend a weekend day. It is a tall hill with meadows, surrounded by small rural villages, green pastures and panoramic landscapes where the wind blows —an essential component for ‘Harmonic fields’, a concert performed by the wind itself instead of actual musicians, an absolutely beautiful scenography made of instruments and nature. Bird-scarer flutes and wind xylophones, mill drums, air cellos and percussions, bamboo whistles and vibrating strings make a symphony of enchanting sounds than can eventually increase their intensity to a dramatic peak and fall all of a sudden or combine sweet crescendos with smooth slowing downs. Indeed, a very intelligent and sensitive composition —even more for the place where it is being played and the disposition of all instruments along a pathway. 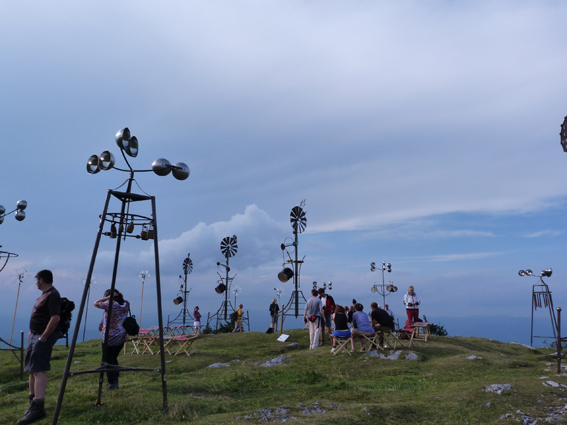 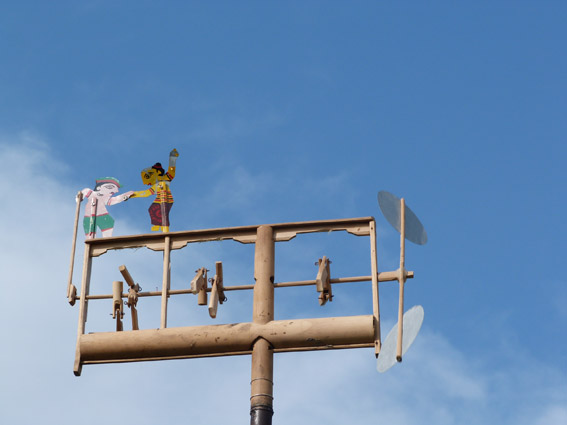 Another action presented during the festival was Kud Ljud’s ‘Streetwalker Gallery’, in which the members of the company described some of the artworks walkers can find in the city as if they were in a museum: traffic signals, stains of paint in the walls, the sound of a block of apartments listened from the alley… This action was performed at the same time in Graz and in the city of Maribor, in Slovenia: audience was put into a bus after the presentation in Austria and taken to Slovenia for the second part of the street gallery, and vice versa.

What about puppets though?

“In puppetry, I like to see that classical forms are still there and they can match in our contemporary society.” So that is why this year there were two different views over Kasper. 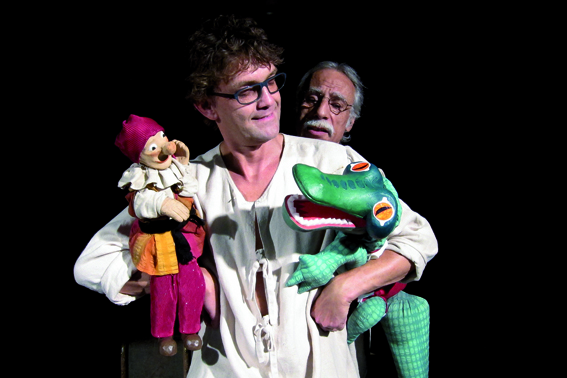 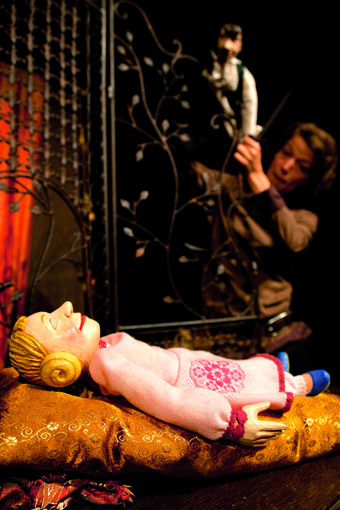 The first one was ‘Der Herzkasper’ by Bavarian Florian Feisel —unfortunately I was not there to see it—, and the second one was ‘Das Kroko dicke dil’, by the veteran puppeteer Heine Brossmann, from Austria. Even if both shows are obviously based on the local tradition they are a step beyond. While the performance by Florian Feisel is described as an “eccentric piece about unequal friends and essential self-perception” and “strange story about cowardice and the pleasure of learning how to fear” in which “classical glove puppets are combined with digital masquerade”, Brossmann’s Theater Trittbrettl transgressed the traditional dramaturgy by putting on scene a crocodile with flu that can not work, so Kasper can not be either himself (we will soon publish a complete chronicle of this show). Schrempf: “Brossmann is a highly experienced austrian puppeteer that turns 30 years of profession this year too. He always played Kasper, so I asked him to do a new show and think of something unusual, because I did not want just to present a regular show. I think he did it very well and still kept the interest in classical characters.” The show ‘Das Kroko dicke dil’ was co-produced by the festival La Strada.

Another puppetry show presented during the festival was ‘Dornröschen’, by Theater Anna Rampe from Berlin. Again for kids and again a transgression of a classical fairy tale —‘The Sleeping Beauty’. In this case, the puppeteer plays the role of the witch with a mask and the characters do not fall into traditional clichés of male and female relationship —on the opposite, the princess is an independent girl in front of a shy prince. This is a table puppets show manipulated with short rods.

Werner Schrempf: “What I really like is to present different forms of art on a stage coming together.” In this edition 50% of the shows presented at La Strada were co-productions with the same festival.