The 19th of October the exhibition “Routes of Pulcinella” opened its doors without an official opening due to the blow it’s been for all the death of Miguel Arreche a few days ago. An exhibition that the TOPIC of Tolosa has been preparing in parallel to the research project by the person who signs these lines, Toni Rumbau, and which has culminated in the publication of the book “Routes of Pulcinella. Puppets and Cities of Europe”. The Spanish version of this book has already come out and will be formally presented at the TOPIC of Tolosa during Titirijai, the 28th of November, Thursday. 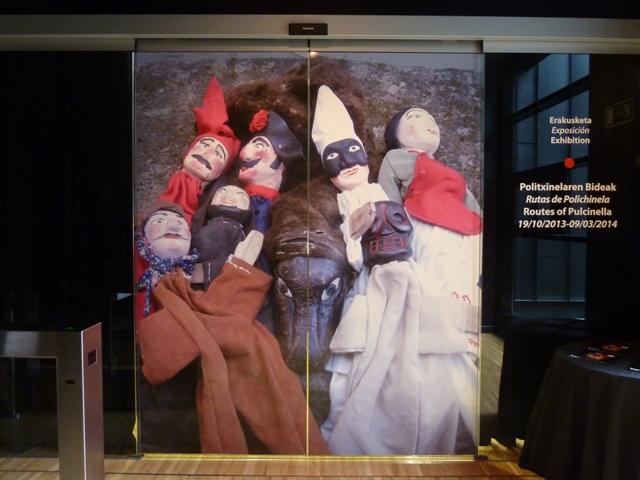 Entrance doors to the exhibition.

I have to say that the exhibition is, simply, extraordinary. Of course, unique in its gender. A detailed and exquisite work by María San Sebastian, responsible of the exhibitions in TOPIC, and that during its long period of gestation had the tireless guide of Miguel Arreche, and the constant encouragement and support of Idoya Otegui, who from the beginning, already three years ago, propelled the project with determination, looking for the missing puppets, either buying them to remain integrated in the collection of the Museum of TOPIC, either by loans from other European institutions, such as the very Museu da Marioneta in Lisbon (which, by the way, will repeat exhibition with new contributions in July 2014 in Lisbon), or the Tandarica Theatre, from Bucharest. Other puppets lent by some puppeteers must also be highlighted, as the two Catalonian puppets of Titelles Vergés , the Robertos of José Gil, the Italian masks of Walter Broggini from Varese, the Milesi Family from Bergamo, Romano Danielli from Bologna, or the Fondazione Benedetto Ravasio also from Bergamo. 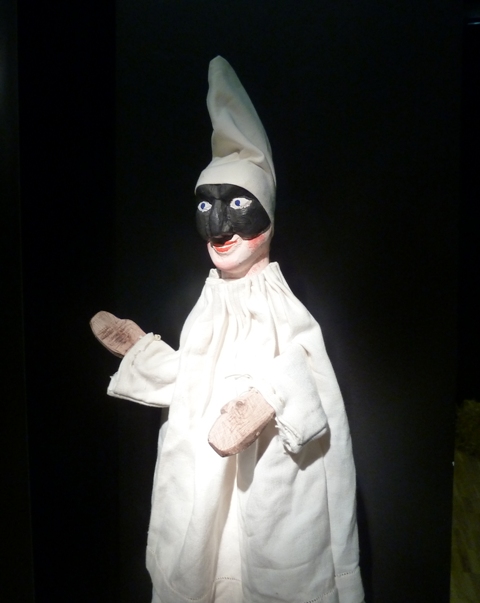 The exhibition shows the various European Pulcinelli, among which the Turkish Karagöz and Iranian Mobarak are included, this is to say, from a very broad and open conception of what Europe is considered. When you enter, the visitor finds Pulcinella, the Neapolitan matrix of the whole thing, a beautiful puppet by Bruno Leone made ​​expressly for the exhibition. And, on your left, a huge map of Europe is displayed where the different characters that make up the European family of Pulcinelli are indicated by numbers. This map gives the exhibition a strong personality and tremendous value, almost political and deeply ideological. It explains how these traditions, as different from each other as they are, instead separating, united different cultures and cities in Europe. 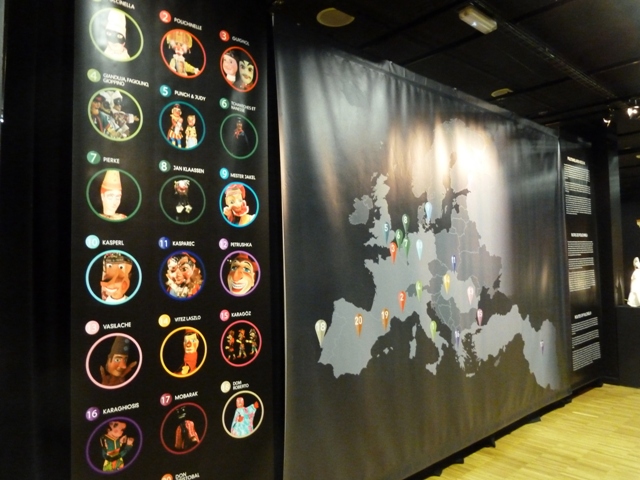 In front of the map, the various ensembles of puppets exhibited start to unfold, grouped by their origin, tradition or main character. There are the characters that accompany Pulcinella in Naples, a whole cast by Bruno Leone ordered by TOPIC. Beside them, Guignol and Gnafron focus the group of characters of the Guignol of Lyon, that had so much prestige throughout Europe. Two ensembles of beautiful Italian puppets with masks from different cities come after: the first one with the zanni Arlequino, Brighella and the showy Gioppino of Bergamo, the old Tartaglia, Colombina, the zanni Meneghino of Milan and Fagiolino of Bologna; and the second one, with a striking devil and other usual characters in the puppet scenes. A tremendous cast of Punch and Judy follows them, with an exquisite Death with a haunting face. And the traditions of Mester Jakel in Copenhagen, Jan Klaassen in Amsterdam, the Kasperls of Frieder Simon of Halle, a beautiful Vitez Laszlo accompanied by the Devil from Budapest and a small Kasparec with a devilish face come next. Petrushka is also there, and Vasilache from Romania next to his wife Marioara, a loan by Tandarica Theatre. In one corner, three characters greet us from a column: they are Pierke from Ghent, and Tchantches and Nannesse from Liege. 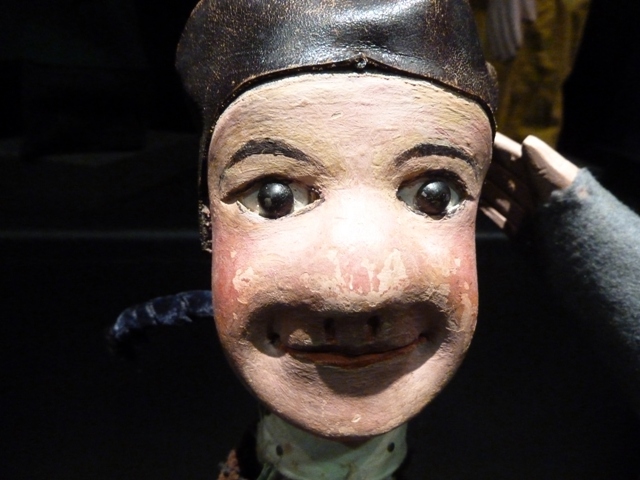 The group of three beautiful Don Cristóbales Pulcinellas sculpted by Helena Millán focus the visitor’s attention and, next to them, two Catalonian puppets donated by Titelles Vergés: Pericu Titella and the Devil. After, another group of impact: the Robertos of Manuel Rosado, from the Museu da Marioneta of Lisbon, a group of nine beautiful puppets that constitute one of the jewels of the exhibition. And almost in front of them, another gem: the unusual puppet ensemble of the Iranian Mobarak. 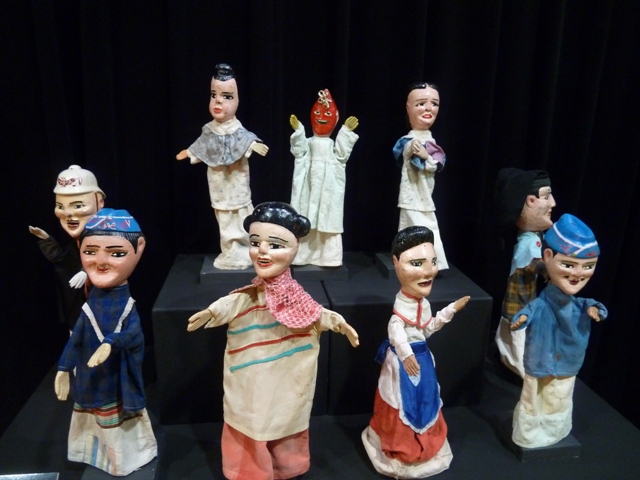 Beside the puppets from Iran, a large screen shows us a pair of figures from the Greek Karagosis and, next to them, a complete set of characters of the Turkish Karagöz, silhouettes by Özek Cengiz made ​​expressly for the exhibition on behalf of TOPIC. 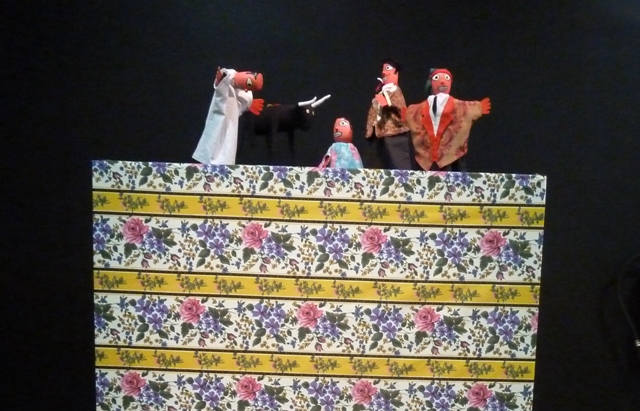 The right wing of the exhibition hall is occupied by five attractive teatrinos that give an idea of the places where our characters usually play: a teatrino of Titelles Vergés, with a nice old scene, a Punch and Judy puppet theater with Punch in the center of the stage, a teatrino from the collection of Mariona Masgrau that hides in its mouth a video where puppet scenes are shown (here it’s worthwhile to stop and contemplate the proposed scenes, some magnificent ones and very representative of some of the traditions present in the exhibition), a teatrino of the Vecchio San Carlino made by Bruno Leone, with a monk and the dog in an action frozen in time, and, finally, a beautiful teatrino of Dom Roberto, with a full cast of puppets sculpted by José Gil, that the Portuguese puppeteer has given the TOPIC of Tolosa. 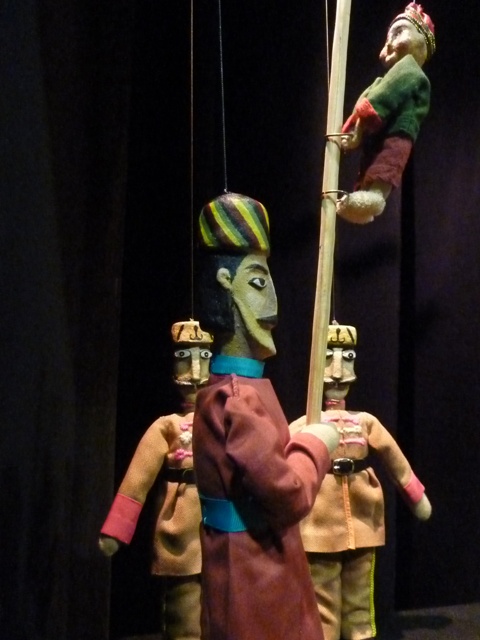 In summary, a unique journey through the various European traditions, which we’ve seen together so rarely and with such thoroughness. They give us a perfect and, I would say, complete idea of this European reality of the puppets. As the catalog says: 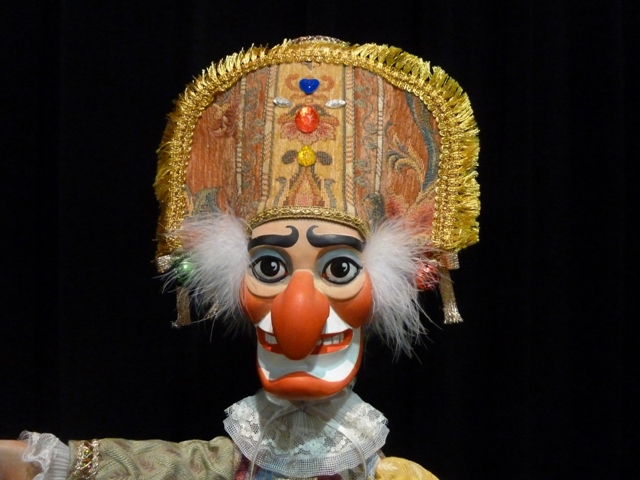 “This exhibition aims to display to the public the Europe of Pulcinella, in which most cities have a puppet that represents them: small myths that form their popular and humble souls, and that talk about some of their most peculiar, archetypal and hidden features. Naples has Pulcinella; Paris, Polichinelle; London, Punch; Lyon, Guignol; Moscow, Petrushka; Barcelona, Titella; Madrid, Don Cristobal; and Tolosa, through TOPIC, has now Mariona. 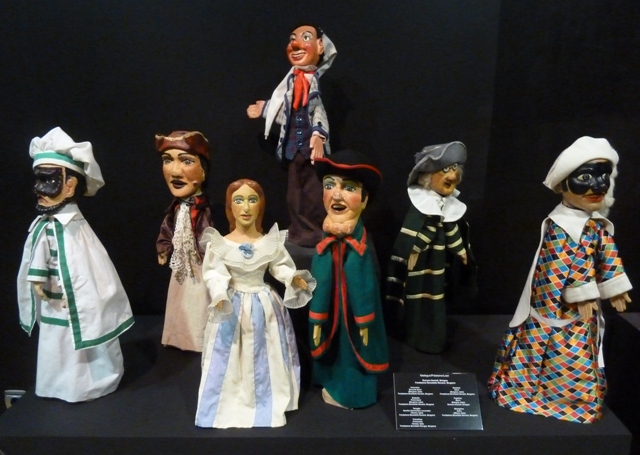 Europe has a very curious character, the protein Pulcinella, the Neapolitan mask that as he moved and expanded from city to city throughout the centuries, has become a fruitful archetype of vitality and sovereignty, of the individual, after having generated across the continent a family of close brothers and relatives. 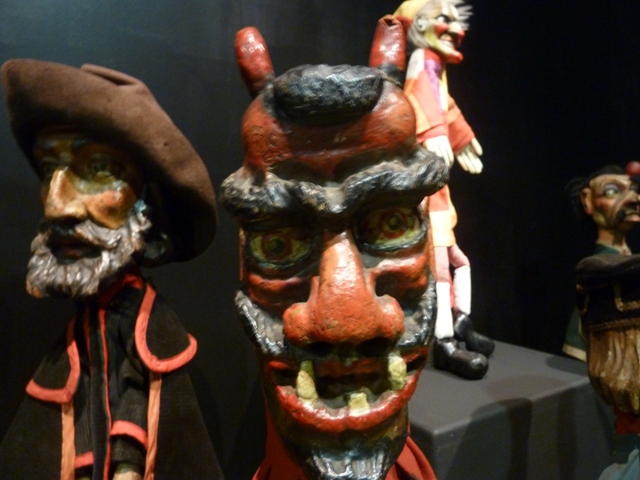 This family of small European heroes is a wealth of stories and characters that are far from the great myths and religions that have tried to monopolize cultures, traditions and beliefs. These puppets are, on the contrary, small and ephemeral myths, but deeply rooted in the fabric of the cities that host them. Pulcinella is the starting point. Born in Naples during the Renaissance period, he goes over Europe and in every city undergoes transformations: his nose grows there; the ones beyond make him rich or miserable, happy or unhappy; some of them put him a hat and others take it off; they leave him grow a beard or mustache; they excite him the anger, gluttony or lust; and all of them make him talk with the language of each city. And wherever Pulcinella doesn’t arrive, there are other characters who commune with his own psychology.” …. 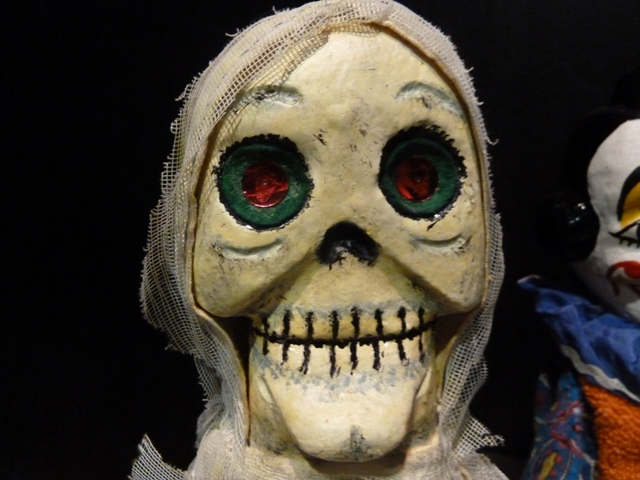 Death. Puppet from Punch and Judy.

A unique exhibition, which responds to a huge logistical effort of the TOPIC Museum, and that will be open for several months so that people interested could the opportunity to visit it.

Do not miss it!

(you can also view  a diferent article and more pictures here, in Rutas de Polichinela Blog)

(see here some pictures from the exhibition) 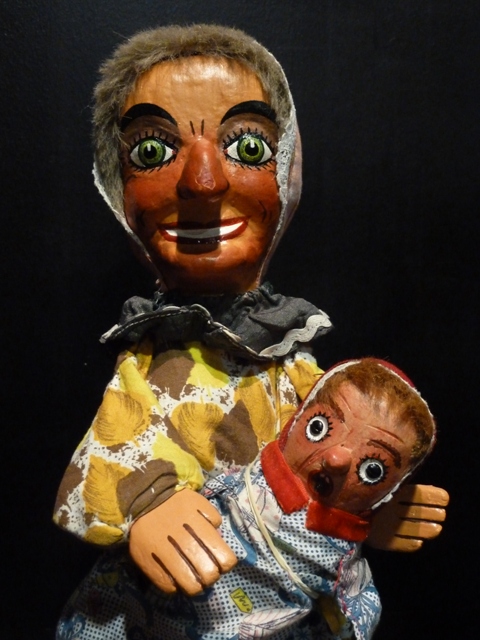 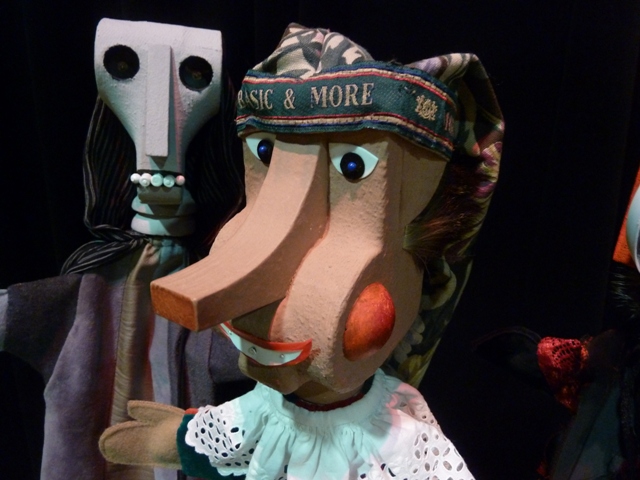 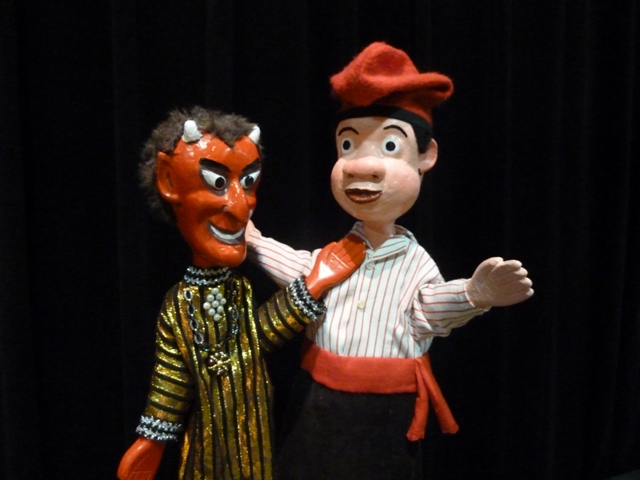 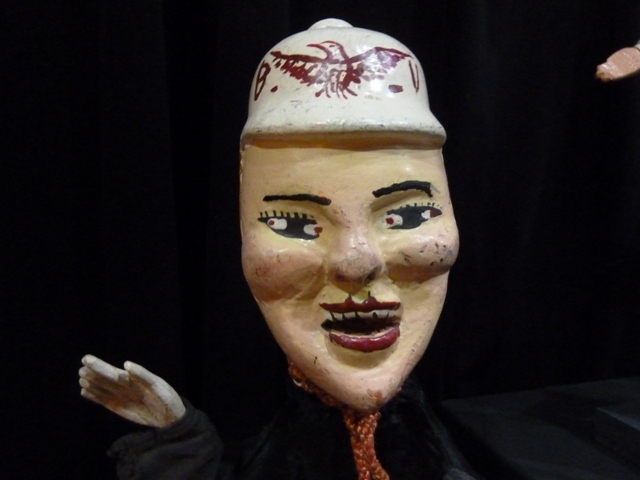 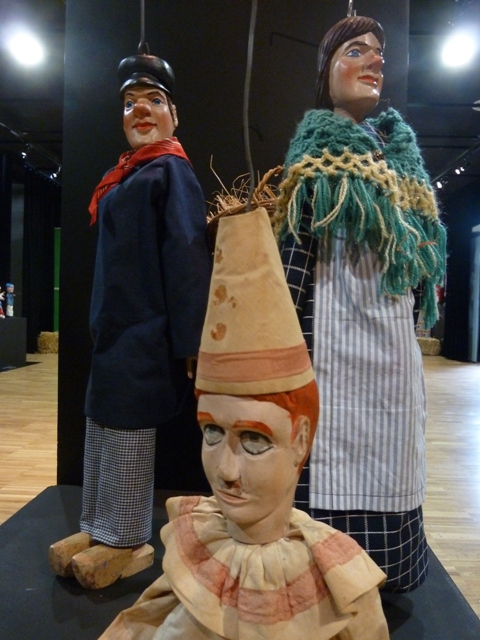 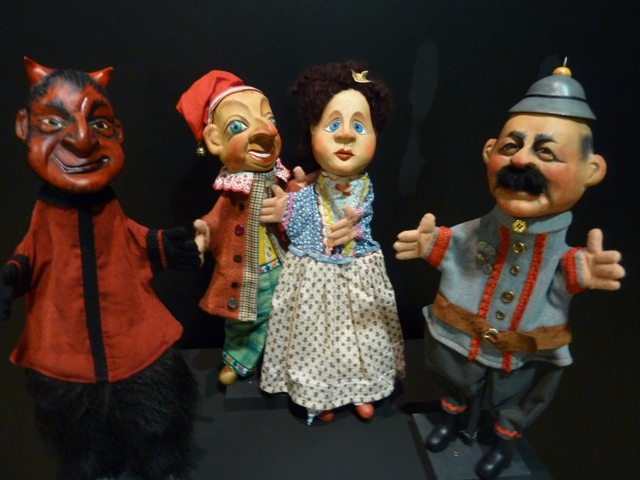