To satisfy the requests received to publish the papers presented at the “Symposium Punch: Between Myth, Tradition and contemporaneity” (21, 22 and 23 November 2013, at the Theatre Institute of Barcelona, ​​organized by the magazine Puppetring see here), and having already published the English version of Karim Dakroub the shadow theater in the Arab world (see articles here), that the presentation by Cengiz Özek, Karagöz Master and director of the International Puppet Festival of Istanbul. 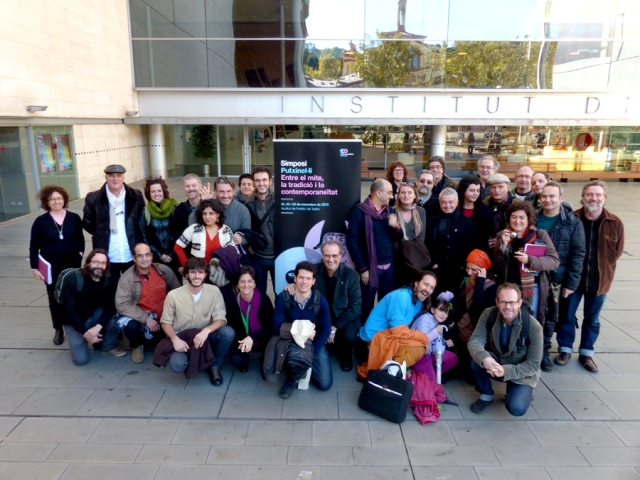 Karagöz was born in Istanbul. The art spread from Istanbul to the different parts of the Ottoman Empire across Greece, Bosnia and Romania in the Balkans and Syria, Egypt Tunisia and Algeria in the Middle East and North Africa, and also Cyprus. 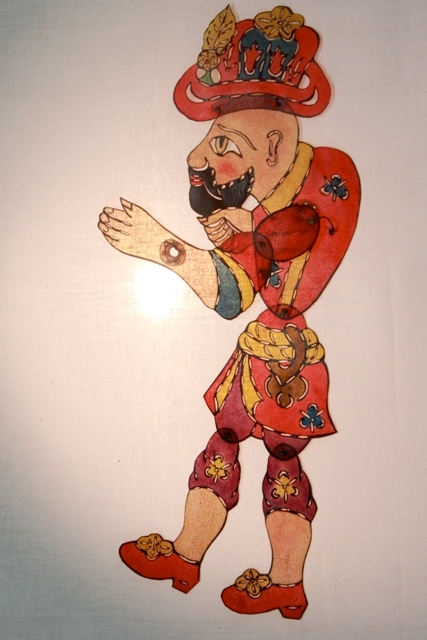 Construction of the plays.

There are four main segments in Karagöz plays. 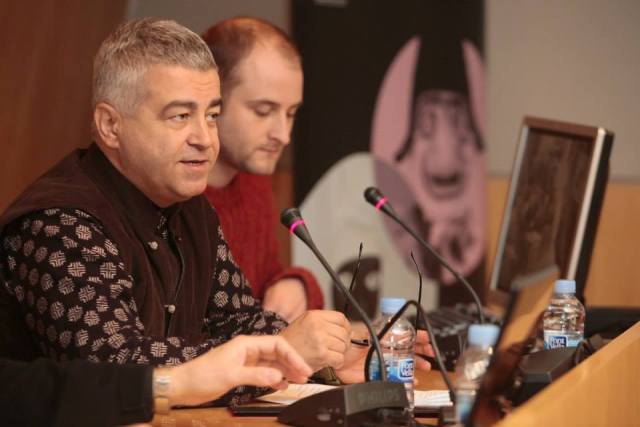 Cengiz Özek and Stefan Carelius, in the Simposium of Barcelona.

1 – Intro: Before the show starts a figure, which is unaffiliated with the show itself, is moves across the screen for a short visual shadow sequence accompanied with the sounds of a sizzling sounding mouth instrument called nareke. This is followed by one of the main characters, Hacivat, who enters the screen with songs and poems. He invites Karagöz down. Karagöz is always reluctant, but ends up coming down to fight with Hacivat. The segment ends here. All Karagöz shows start like this.

2 – Dialogue: In this part Karagöz and Hacivat have a conversation. Even if this part is written in the script, the duration varies depending on the connection with the audience and the skills of the shadow master. Karagöz makes references to political topics and tries to hold the pulse of the audience high. Hacivat ends this segment by mentioning the subject of the main story.

3 – Main Story: The Karagöz plays have a great variety. 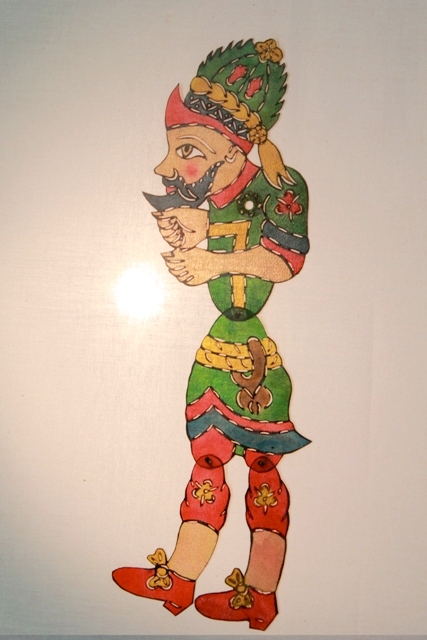 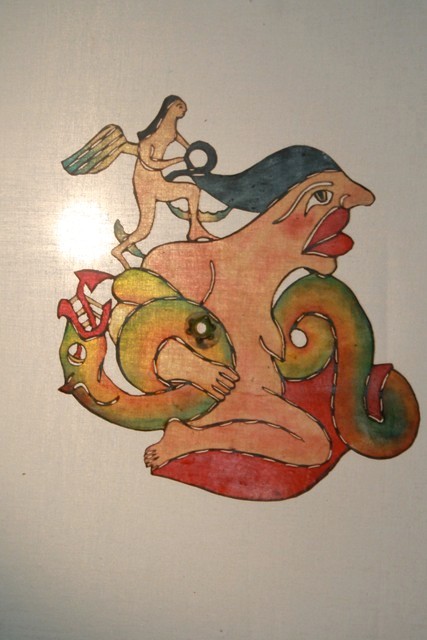 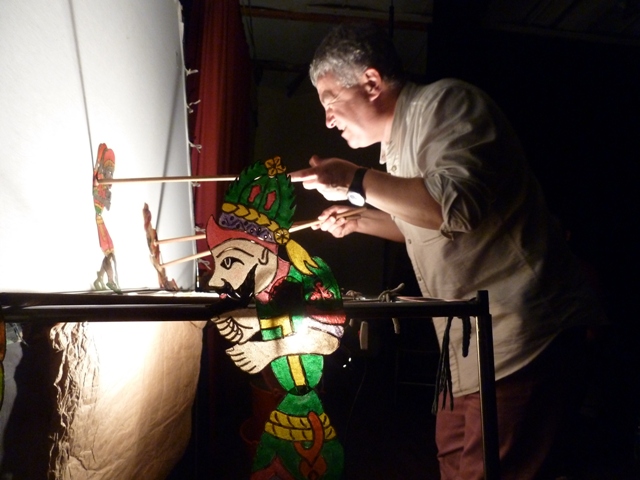 – Kanlı Kavak, Cazular (The Witches) – Plays with connection to shamanism

In all these different kinds of performances you will find all the different people, objects and animals from Istanbul in form of Karagöz figures. Examples of architecture can also be seen. Around 400 different figures take place in the classical Karagöz repertoire. We can sort these figure in 12 different classes. 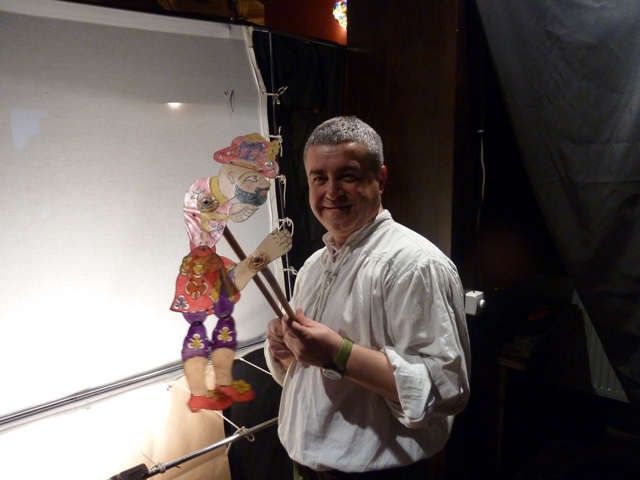 7) Mentally and/or physically handicapped persons: Kekeme (The Stutterer), Kambur (The Hunchbacked), Hımhım (A person who speaks through his nose), Kötürüm (The Crippled), Deli (The Lunatic), Esrarkeş (The Junkie), Sağır (The Deaf), Aptal or Denyo (The Idiot) 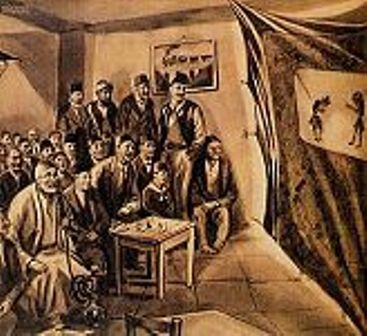 11) Temporary side characters and children

4 – Outro: The main story has ended. All the characters and decors are removed and the shadow screen is completely empty like the beginning of the show. Only Karagöz and Hacivat appear. Karagöz says he is very tired and needs to rest, and apologizes if he has expressed himself wrong or insulting. Sometimes he invites a dancer to enter the screen and end the play with entertainment. 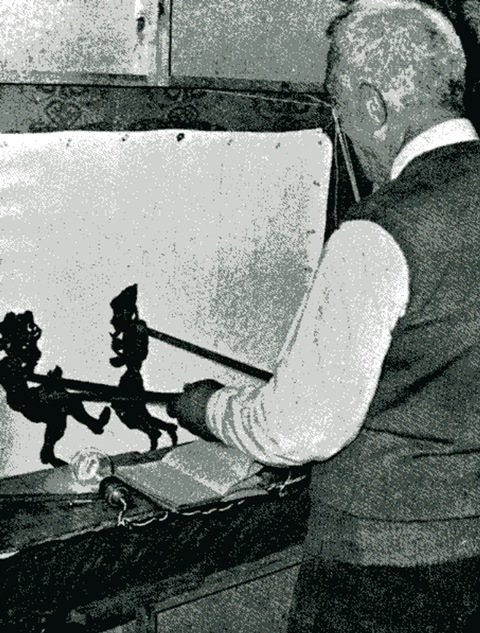 In the last period of the Ottoman Empire Karagöz had to share the stage with İbiş (hand puppet) and Ortaoyunu, which is a staged variant of Karagöz performed by live actors. The stories and characters have great similarities with the Karagöz plays. In the final days of the Ottoman Empire there was not as much time for amusement as before because of the foreign invasions. Also long wars such as the transition from the Ottoman Empire to the Turkish Republic resulted in a great loss of the old shadow masters. Europe had greater impact on the country after the republic was established. Turkey opened new theatre academies with European theatre workers. Stanislavski methods substituted Turkish theatre. Together with this new European fashion many writers looked down on the Karagöz art, calling it crude and irritating. Through the nationalization attempts the Karagöz art was re-named as “Traditional Turkish Shadow Theatre”, thus making it an art of the whole country. However, Turkey couldn’t find its place in this multi-cultural art. The remaining Karagöz masters attempted to make new approaches to the art, but they faced difficulties on adapting these stories to the shadow screen, maybe they were not able to. In 1973 Karagöz faced great agony. The Ministry of Culture and Tourism tried to breed new Karagöz artists by opening courses with the few remaining masters. The results were Tacettin Diker, Metin Özlen and Orhan Kurt who are now recognized as living UNESCO heritages a few years ago, and a few more masters. With the students brought up by the masters who participated these courses the Karagöz art seems to be in safe hands in Turkey today. 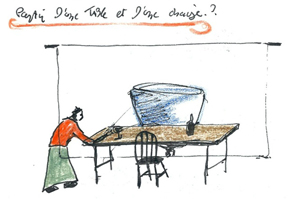