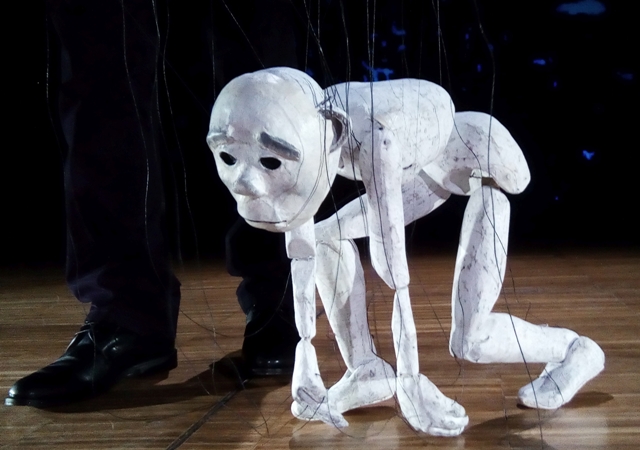 At last, we were able to watch at the Teatre de Ponent in Granollers, a performance of the new show IDENTITATS (Identities) by Carles Cañellas and Susanna Rodriguez of the Rocamora Teatre Company. An enormous challenge, which both puppeteers, residents in the village of Calders, took upon themselves in order to open this new cycle in their lives. I saw the first steps during the project presentation in San Sebastian at the Unima Congress 2016 in the month of May (see here). I knew about the devilish difficulty that Carles had imposed on himself, and the first thing that must be said, after watching the show, is that the Rocamoras have succeeded with flying colours. 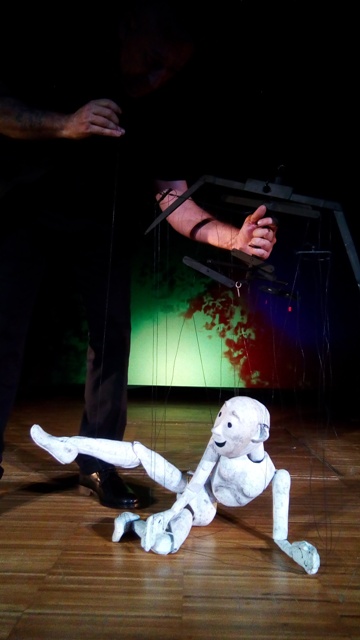 Namely, stepping on stage with a single string-puppet, full of threads (90 cm height and 27 strings) and hardly anything else -if we don´t count six masks, a couple of clothe bags and a box, with the necessary sonorous and visual accompaniment of the video and the electronic music, which was functional and well done-, is already a feat of considerable daring. We are dealing with a show that advertises itself as contemporary dance, and performed, evidently, by a single marionette. How is he going to make the marionette dance for a whole hour? 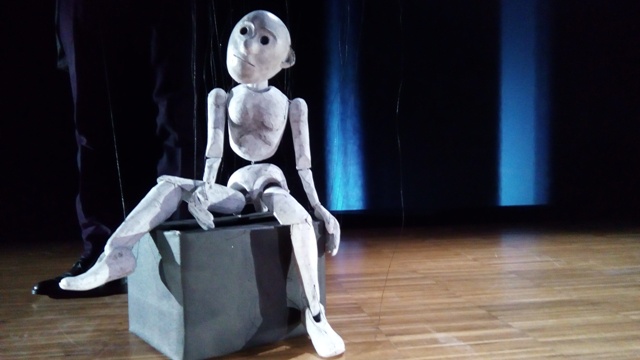 I believe that the show´s secret, what turns it into almost an initiatic test for the puppeteer, for the string-puppet and for the audience, consists in this titanic fight that takes place between both in plain view of the audience. Between two independent beings: one made out of wood, the other of living flesh which are, at the same time, united and separated by the strings hanging from the control at one side, and sawn to the marionette’s body at the other end. One could almost say that the true leading roles are the strings. Which the audience does not see, or sees in part, although aware of their existence. Much like a subtle substance joining what separated, allowing movement and life, but denying them as well.

Marionette and puppeteer wrestle against this cotton-made substance made of raveled thread, not docile at all, obstinately complicating the manipulator´s life, threatening to end the puppet´s life and to lift its body and limbs but, at the same time, leaving them dead to gravity´s mercy. The strings become in this way a real, obvious, living paradox. Invisible, since the threads, when black, disappear against the dark floor and background, but also always present. They are a substance that allows itself to be touched or rather, that demands being touched, as if its task of joining two opposites needed some caressing by the manipulator´s hands and the puppet´s patience in allowing itself to be moved, to jump and dance. 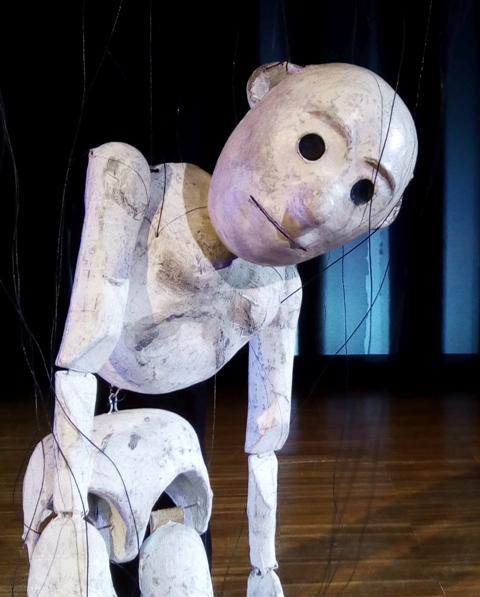 This metaphysical battle’s strain is the soul of this show, which avoids some virtuoso exhibitions often incurred in by marionettes, in order to pinpoint this prominence of the strings, this empty space that separates and unites, basis of the manipulation. It is as if the paradox became alive and centered the whole of the audience´s attention, imposing the battle of the hands, of the body, of the wood, of the articulations, through the canons and guns hidden in the contradictory essence of the arrangement of the strings hanging from the awesome control.

The masks that the puppeteer keeps taking out of his bag and from the wooden box are only self-imposed new challenges so that the mediating substance of the paradox is able to express its total tension strength. These are difficulties that demand from the manipulator, very well guided by Susanna Rodriguez´s choreography, to create the adequate movements for the expression of each mask, always fighting with the same raveling of the thread, with the control and the distance that separates the hands from the puppet, a short distance demanding the constant revision of the strings, which seems to have its own life, to have its own logic not understandable to anybody since it is a logic made of an aleatory contradiction. 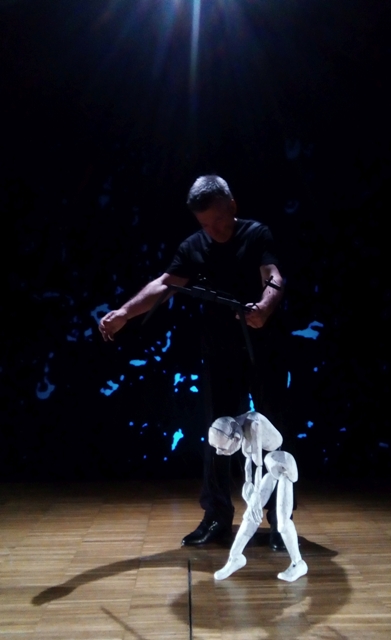 And, as the show goes on, we realize that the puppeteer´s main challenge is none other than reaching the end alive, himself and the marionette, both keeping the dignity of a presence which knows how to tackle the paradox´s contradiction. One might think that the result is the puppeteer´s victory. In a certain way, it is, of course. But it is the strings that are, in fact, the winners because they provoke the end of the puppeteer´s actions and oblige the puppet back into the sack.

A magical tension is maintained throughout the whole length of the performance, since the substance that centers the show and the audience´s attention is really the vacuum of the invisible threading. And, while it emerges victorious from its nothingness, the two defeated servants of this dark energy take their bow, puppet and puppeteer exhausted by the effort of having created the impossible.

This is an unusual and profoundly philosophical show. Which expresses itself from the void and the silence of that which separates and unites. An essential find that allows to focus our attention where we people never look, used as we are to only see and identify ourselves with the extremes. Here, these extremes are defeated and taken prisoner by the mystery of the exigent and accurate demands of the trade. A trade that both Rocamora Teatre puppeteers have shown themselves to be in full control of.