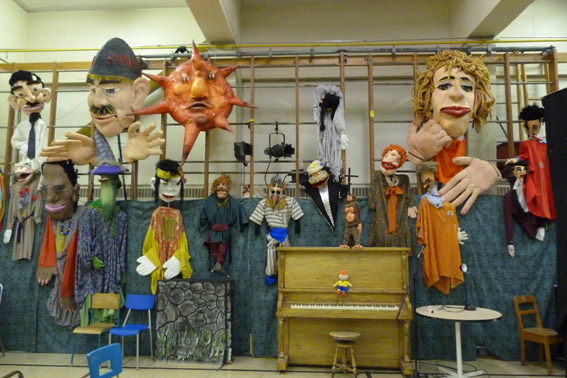 Some puppets created at ENAM.

ENAM is a non-profit institution founded in 1990 by Richard Bouchard, director-general and artistic manager, Réjean Arseneault, coordinator, Clermont Lavoie, Jean-Guy Boily and Gabriel Bouchard. Last September, few days after professional string puppeteer Jordi Bertran visited the center, I had the chance to talk with Mr. Richard Bouchard, a professional puppeteer himself too since 1978, who introduced me to some of his “clients”. 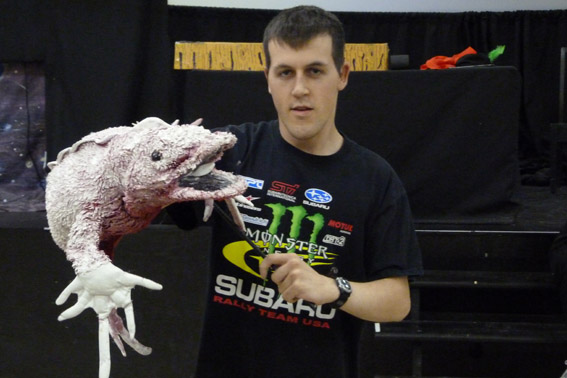 “People attending to ENAM”, said Bouchard, “have serious mental illnesses, but they do not come here to find a cure, but rather to be trained in an artistic ability that will eventually make them more conscious on their own disease. This makes the relation with their psychiatrist be more fluent and their therapeutic process improves. What we do here is giving an educational service, so they are not our patients, but our clients.” 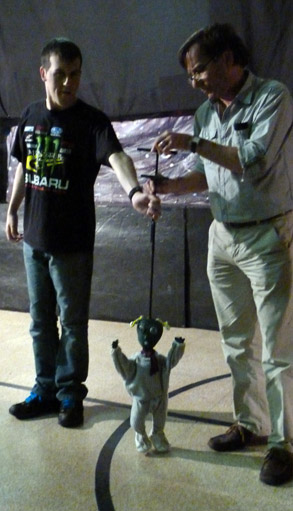 He added: “Puppets are a good medium. Through them, people can learn to observe. I give you an example: a man diagnosed with schizophrenia wrote a play in which the puppet represented his illness and performed the voices he heard in his head. So he could talk to those voices represented outside, in a puppet, and he could throw that puppet away. People do not come here as to a medical center, but to a place where activities for people with problems are made. They come to school or to work… This helps to revalue the individual, to raise their self-esteem, and this is our goal.”

ENAM had an average of 17 clients per year since mid 1990’s, but from 2007 it grew until 50 per year. This is due to leaving the local of the Centre des Arts et de la Culture and associating with Laure Conan adults training center along with a pilot project that involves different ministries. This change also pushed ENAM to participate in the Ministère de l’Emploi et de la Solidarité Sociale du Québec’s actions aimed at helping unemployed people, more specifically in the Interagir program.

This project requires 50 people to be assisted. Two reasons are given: in a quantitave dimension, in relation with Quebec employment office, a 10% of clients become active, this means they can get out of their isolation and get involved in some cultural activity after they have attended the center; in a qualitative dimension, a research on evaluation is made during two years after immediate results. In any case, the goal of this project is not to make this “unemployed” people available for work, but rather to improve their welfare. 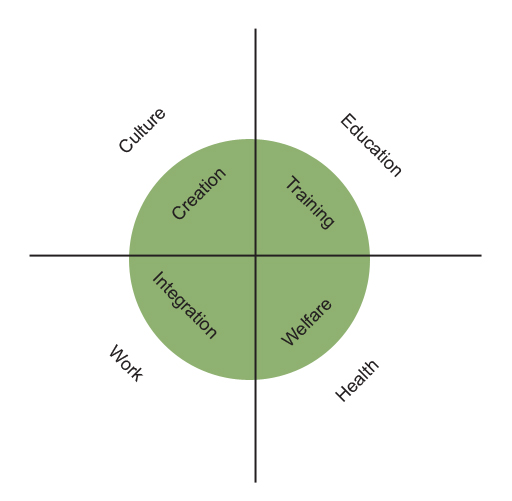 ENAM works in four fields of individual: creation, training, social integration and welfare; each of these fields can be seen in relation to different administration powers.

Funds are not easy to find anyway. Even if the work at ENAM is very specific, it is directed to various needs of personality, so is it possible for one single ministry to undertake it? No; four different ones allow ENAM to assume the global of its activity through a partnership. 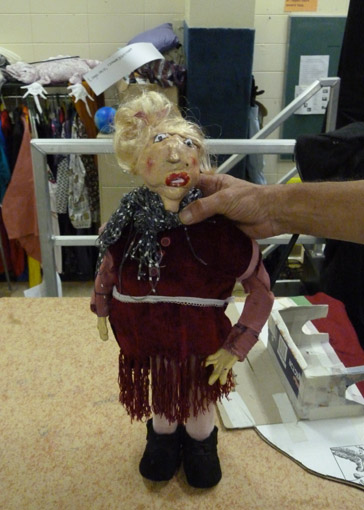 One example: the agreement between the École Nationale d’Apprentissage par la Marionnette and the Quebec Employment agency (Ministry of Employment) and Health and Social Services agency have a contract to develop the program Pass Action for social integration. Currently, 35% of ENAM’s funds are sustained by public administrations.

A partnership between the school, the University of Quebec at Chicoutimi and the University of Quebec at Montreal runs an academic research based on monitoring people for a period of five years at the center. This is part of the Ministry of Education contribution, that lends places and professors to this project. $50,000 plus come from the Ministry of Health. The Learning through Puppets National School is officially recognized as a community organisation aimed at helping people with mental illnesses through puppetry.

Richard Bouchard picked me up and drove me to the ENAM’s place just before a short performance started. It was a former school now converted into a creation center —there is a workshop in each room and common areas for collective presentations such as the one I was about to see. The former gym is now a theatre with a lot of colourful masks and puppets made of paper pulp, cardboard, cloths and foam hanging on the walls, as if they were ready to see the show too. Everyone was excited —the performance is a very special moment and, besides, I was the second foreigner that visited the center in few days. I was introduced to all and had the pleasure to know Monique Dallaire, the artist that made the couple of the ‘Little good man of foam’ by Jordi Bertran and gave it to him as a present (see this chronicle here). Then the show started. 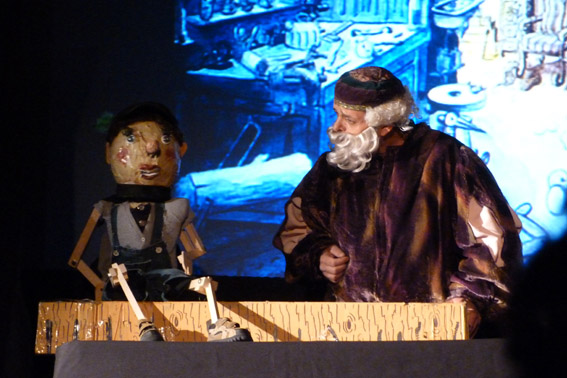 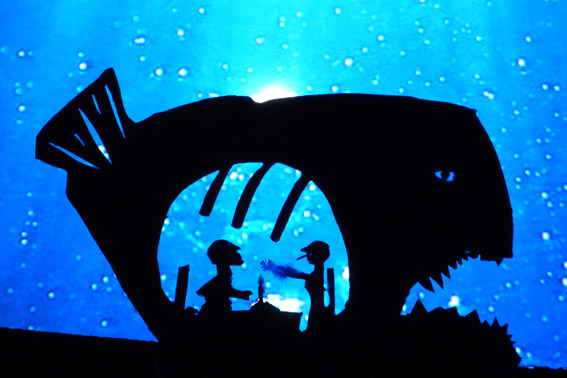 It was a version of ‘Pinocchio’ made using different techniques: acting, mask theatre, shadows and big table puppets. “The plays represented here can be written by the same clients or adaptations”, told me Mr. Bouchard afterwards. “We do not want to create new conflicts in people that have many problems already. We do not push a person who feels shy and does not want to appear on stage. Everyone can do that thing that makes him feel more sure of himself. We just offer this person a professional frame to protect him, as the whole group, as a collective, can participate in the creation of sketches.” 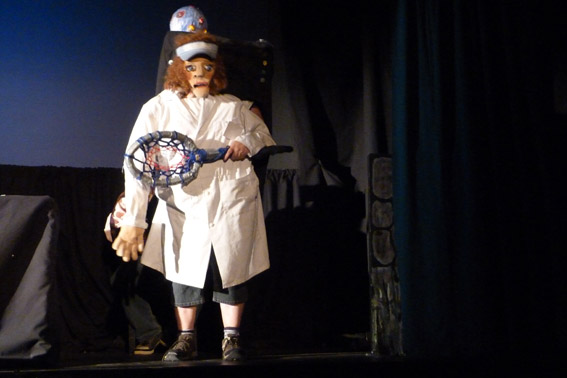 He continued: “Our clients may have physical problems resulting from their mental disease or medication. The medicines they have to take may affect they capacity to remember the text of a play or cause fatigue, so if one prefer writing over acting, or building over technique, we do respect it. In the end, they all feel part of a team and the success and the applause go to each of them.” 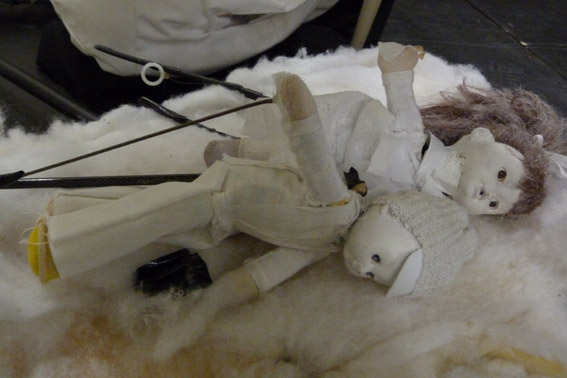 White puppets allow to do a good exercize: they can quickly change their expression just changing the lights.

“They all work here three days a week, seven hours a day, alternating two big groups of 25 people. It is a big deal to know and choose the technique. A person who does not like acting may like perform shadows instead. All they are extremely sensitive and we explore strong feelings like shyness, depression, exclusion or suicidal tendencies. We work in groups doing exercises like the one of white puppets (like in a show titled ‘Caméléon’). These can change quickly their expression just by changing the colour of the light, so it is very useful to work on symbols and think about sentimental problems, education or rejection. Little by little, thanks to comprehension and observation, they get more prepared to face everyday problems and switch their deficiency into a handicap —there are, to me, different concepts in these two words. And also we prepare them for success, because it is not easy to hear the applause of an audience when you are habituated to be marginalized.” 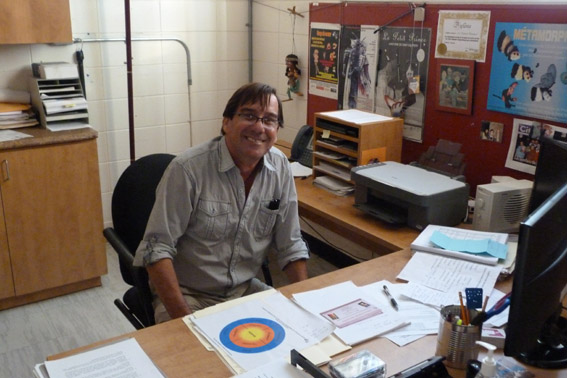 Richard Bouchard in his office.